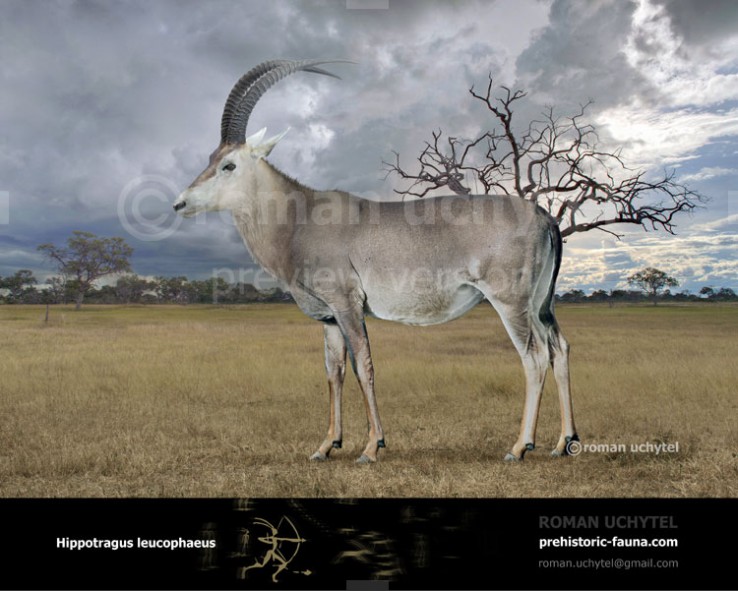 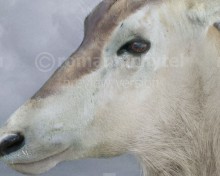 The largest mounted bluebuck specimen is 119 centimetres tall at the withers. Its horns measure 56.5 centimetres along the curve. The coat was a uniform bluish-grey, with a pale whitish belly. The forehead was brown, darker than the face. Its mane was not as developed as in the roan and sable antelopes; its ears were shorter and blunter, not tipped with black; and it had a darker tail tuft and smaller teeth. It also lacked the contrasting black and white patterns seen on the heads of its relatives. The bluebuck was a grazer, and may have calved where rainfall, and thus the availability of grasses, would peak. The bluebuck was confined to the southwestern Cape when encountered by Europeans, but fossil evidence and rock paintings show that it originally had a larger distribution.

Europeans encountered the bluebuck in the 17th century, but it was already uncommon by then, perhaps due to its preferred grassland habitat having been reduced to a 4,300-square-kilometre (1,700 sq mi) range, mainly along the southern coast of South Africa. Sea level changes during the early Holocene may also have contributed to its decline by disrupting the population. The first published mention of the bluebuck is from 1681, and few descriptions of the animal were written while it existed. The few 18th-century illustrations appear to have been based on stuffed specimens. Hunted by European settlers, the bluebuck became extinct around 1800; it was the first large African mammal to face extinction in historical times, followed by the quagga in 1883. Only four mounted specimens remain, in museums in Leiden, Stockholm, Vienna, and Paris, along with skulls and horns in various museums.