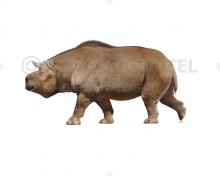 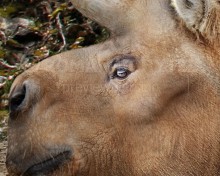 Hoffstetterius (†Hoffstetterius (Saint-André 1993))
Order: Notoungulata
Family:Toxodontidae
Subfamily: †Toxodontinae
Temporal range: during the Middle-Late Miocene (South  America, ~11.608–5.332 Ma )
Dimensions: length - 2,5 m, height - 125 сm, weight ~ 700 kg
The described specie: Hoffstetterius imperator
Hoffstetterius is an extinct genus of notoungulate mammal, whose remains were discovered in the Mauri Formation in the La Paz Department in Bolivia. This is one of the few toxodonts found in the Bolivian Altiplano. The only described species is the type Hoffstetterius imperator.
The skull of Hoffstetterius is high and elongated; it measures 527 millimetres in length. The most notable characteristic of this is the elevation of the frontal bone over the nasals, forming a large sagittal crest, which is more developed in the adult individual, and also presents in the anterior frontal area a sort of triangular "shield", which may have served as a point of attachment for a keratinous horn, as in modern rhinoceroses and some toxodontids such as Trigodon and Paratrigodon. In dorsal view, the skull is triangular in shape.
The femur of Hoffstetterius has an elongated trochlear medial crest at its lower end, in the area of the knee joint, as in Toxodon. This type of structure may have served these toxodontids to maintain static their legs while standing, facilitating them to maintain this posture for long periods throughout the day without fatigue, as in modern horses and rhinoceroses.
In the area of her habbitat were found plants typical from a subtropical dry forest, with plants of the genus Polylepis, Zyzyphus and Berberis, whereas the contemporary fauna includes the mesotheriid Plesiotypotherium, a notoungulate that constitutes a fossil guide of the area;[7] the typothere Hemihegetotherium, remains of macrauchenids, rodents like dynomyids, octodontoids, caviods and the chinchillid Prolagostomus. Among the xenarthrans have been found remains of the glyptodontine Trachycalyptoides, the dasypodid Chorobates and the pampatherid Kraglievichia, along ground sloths like scelidotheriids, mylodontids, the nothrotherid Xyophorus and a megatherid.
Tags:
Notoungulata, toxodontidae, South America, herbivorous, toxodon, hoffstetterius, miocene
Related images