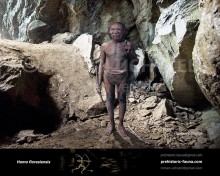 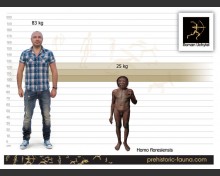 The first set of remains to have been found, LB1, was chosen as the type specimen for the proposed species. LB1 is a fairly complete skeleton, including a nearly complete cranium (skull), determined to be that of a 30-year-old female. LB1 has been nicknamed the Little Lady of Flores or "Flo".

LB1's height has been estimated at about 1.06 m. The height of a second skeleton, LB8, has been estimated at 1.09 m based on measurements of its tibia. These estimates are outside the range of normal modern human height and considerably shorter than the average adult height of even the smallest modern humans, such as the Mbenga and Mbuti (< 1.5 m), Twa, Semang (1.37 m for adult women) of the Malay Peninsula, or the Andamanese (1.37 m) for adult women).

By body mass, differences between modern pygmies and Homo floresiensis are even greater. LB1's body mass has been estimated at 25 kg. This is smaller than that of not only modern H. sapiens, but also H. erectus, which Brown and colleagues have suggested is the immediate ancestor of H. floresiensis. LB1 and LB8 are also somewhat smaller than the australopithecines from three million years ago, not previously thought to have expanded beyond Africa. Thus, LB1 and LB8 may be the shortest and smallest members of the extended human family discovered thus far.

Aside from smaller body size, the specimens seem otherwise to resemble H. erectus, a species known to have been living in Southeast Asia at times coincident with earlier finds purported to be of H. floresiensis. These observed similarities form the basis for the suggested phylogenetic relationship. Controversially, the same team has reported finding material evidence (stone tools) on Flores of a H. erectus occupation dating back 840,000 years ago, but not remains of H. erectus itself or transitional forms. To explain the small stature of H. floresiensis, Brown et al. have suggested that in the limited food environment on Flores, H. erectus evolved a smaller body size via insular dwarfism, a form of speciation which has been observed in other species on Flores also – including several species of the proboscidean genus Stegodon, an elephant-like creature. (A dwarf stegodont species of Flores, Stegodon sondaari, became extinct by about 850,000 years ago and was replaced by another species of normal size, Stegodon florensis, which then also evolved into a dwarf form, Stegodon florensis insularis, which disappeared about 12,000 years ago.) This hypothesis has been criticized by Teuku Jacob and colleagues who argue that LB1 is similar to the pygmy peoples who populate a Flores village, Rampasasa, - and who point out that size can vary substantially in pygmy populations. Contradictory evidence has emerged.