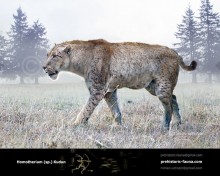 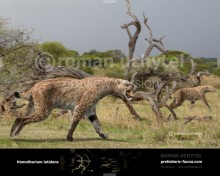 Homotherium latidens is a genus of saber-toothed cats that lived in North America, Eurasia and Africa from the Middle Pliocene to the late Late Pleistocene. It reached 1.15 m at the shoulder and weighed an estimated 150–270 kg was therefore about the size of a male African lion. Compared to some other machairodonts, like Smilodon or Megantereon, Homotherium had relatively shorter upper canines, but they were flat, serrated and longer than those of any living cat. Incisors and lower canines formed a powerful puncturing and gripping device. The molars of Homotherium were rather weak and not adapted for bone crushing. The skull was longer than in Smilodon and had a well-developed crest, where muscles were attached to power the lower jaw. This jaw had down-turned forward flanges to protect the scimitars. Its large canine teeth were crenulated and designed for slashing rather than purely stabbing.

It had the general appearance of a cat, but some of its physical characteristics are rather unusual for a large cat. The limb proportions of Homotherium gave it a hyena-like appearance. The forelegs were elongated, while the hind quarters were rather squat with feet perhaps partially plantigrade, causing the back to slope towards the short tail. Features of the hindlimbs indicate that this cat was moderately capable of leaping. The pelvic region, including the sacral vertebrae, were bear-like, as was the short tail composed of 13 vertebrae - about half the number of long-tailed cats. Several species (H. nestianus, sainzelli, crenatidens, nihowanensis, ultimum) are recognized from Eurasia, which differ mainly in the shape of the canines and in body size. But given the fluctuation range of the size of modern large cats, it is highly probable that all belong to just one species, Homotherium latidens.