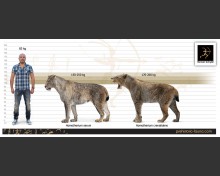 Time period: from the late Pliocene until the late Pleistocene (North America)

In North America, Homotherium serum occurred from the late Pliocene until the late Pleistocene. Remains have been found at various sites between Alaska and Texas. The scimitar cat is about the size of a lion, but lighter in body. The unusually large, square nasal opening, like that of the cheetah, presumably allows quicker oxygen intake aiding in rapid running and cooling the brain. As in the cheetah too, the brain's visual cortex is large and complex, emphasizing the scimitar cat's ability to see well and function in the day, rather than the night, as in most cats. The rest of the skeleton suggests that H. serum is built for short bursts of speed, as well as agility. The broad "wings" of the atlas (first neck vertebra) help to support the massive muscles used to depress the head to inflict a killing bite. The pelvic region, including the sacral vertebrae, are bear-like, as is the short tail composed of 13 vertebrae about half the number in long-tailed cats. Such features suggest ambushing of prey and short chases. Its relatively slender bones indicates a lighter body with more flexibility in running than sabretooths and lions. Like the cheetah, H. serum sacrificed retractile claws for better running traction. Features of the hindlimbs indicate that this cat was moderately capable of leaping. Hindlimbs are short relative to the forelimbs, and have bear-like heel and ankle bones.

Taken together, these features indicate a semiplantigrade stance, the hindlimbs being between that of a bear (plantigrade, or walking on the sole of the foot like humans) and that of a lion (digitigrade, or walking on the toes). Its stance at rest may have been slightly hyena-like with sloping hindquarters. Perhaps the top speed of the scimitar cat would have been greater than a bear and approaching a lion about 60 km/hour. According to relationships between thigh bone (femur) measurements and body weights of large carnivores, H. serum may have weighed about 230 kg in the lion range.