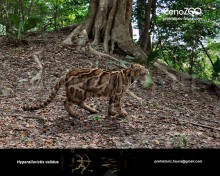 Hyperailurictis is an extinct genus of felid from Miocene North America. The Hyperailurictis species are Pseudaelurus-grade felids and thought to be the first felids in the Americas.
Hyperailurictis intrepidus was a relatively large species, comparable in size to a modern-day leopard, and overlapping in size with the Eurasian Pseudaelurus quadridentatus. H. marshi was also a large species, but differed from H. intrepidus because of certain mandibular features. H. stouti, which was contemporary with the two, was by contrast a very small and slender felid. H. validus overlaps in size with H. intrepidus and H. marshi, being similar in size to a leopard. The final species, H. skinneri is much smaller than H. validus, overlapping in size with the Eurasian species Pseudaelurus lorteti, P. cuspidatus, and P. guangheensis.
Hyperailurictis validus and Hyperailurictis skinneri are the earliest recorded species, both occurring in various late Hemingfordian localities; H. validus in New Mexico and Nebraska, and H. skinneri only in Nebraska. H. validus is also known from several early Barstovian localities in Nebraska.
Tags:
pseudaelurinae, proailurus, cats, miocene, carnivore, North America
Related images