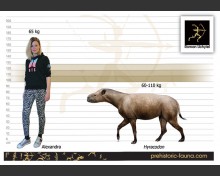 Hyracodon (†Hyracodon (Leidy, 1856))
Synonyms: Aceratherium nebrascensis, Mesamynodon medius,‭ ‬Rhinoceros nebraskensis, Epitriplopus medius
Order: Perissodactyla
Family: †Hyracodontidae
Time period: Middle Eocene–Late Oligocene - Early Miocene of North America
Size: 1,5 m in length, 80 cm in height, 100 kg of weight
Typical representative: Hyracodon nebraskensis
Hyracodon was a lightly built, pony-like mammal of about 1.5 m long. Although Hyracodon looks a lot like a primitive horse,‭ ‬this genus actually represents a form of prehistoric rhino.‭ Hyracodon's dentition resembled that of later rhinoceroses, but it was a much smaller animal and differed very little in appearance from the primitive horses of which it was a contemporary. It was seem to have inhabited a variety of ecosystems,‭ ‬and were probably browsers because the forward teeth in the mouth were not as well suited to cropping grass as those of dedicated grazers.‭ It had a short, broad snout and its long, slender limbs had three digits.
In the Miocene,‭ ‬starting back in the Eocene,‭ ‬the landscape of North America was changing from large expanses of forest to open grasslands.‭ This may in part be why Hyracodon declined and disappeared during the late Oligocene and early Miocene. They died out without leaving any descendants and they mark the end of the phylogenetic branch of hornless, running rhinoceroses.
This small, fast-running creature was a close relative of the largest land mammal that ever lived, the 20-ton Paraceratherium.
Tags:
paraceratherium, eocene, herbivorous, Indricothere, Hyracodonts, Hyracodontidae, odd-toed ungulate, hyracodon, rhinoceroses, Indricotherium
Related images