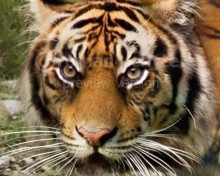 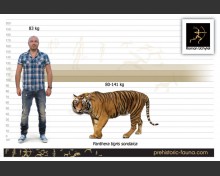 The Javan tiger was a tiger population that lived in the Indonesian island of Java until the mid 1970s. It was hunted to extinction and its natural habitat converted for human use. It was one of the three tiger populations in the Sunda Islands.

Formerly, it was regarded as a distinct tiger subspecies, which had been assessed as extinct on the IUCN Red List in 2008. In 2017, felid taxonomy was revised and the Javan tiger subordinated to P. t. sondaica, which also includes the still surviving Sumatran tiger.

Results of mtDNA analysis of 23 tiger samples from museum collections indicate that tigers colonized the Sunda Islands throughout the last glacial period 110,000–12,000 years ago.

The Javan tiger was small compared to other subspecies of the Asian mainland, but larger than the Bali tiger, and similar in size to the Sumatran tiger. It usually had long and thin stripes, which were slightly more numerous than those of the Sumatran tiger. Its nose was long and narrow, occipital plane remarkably narrow and carnassials relatively long. Based on these cranial differences, the Javan tiger was proposed to be assigned to a distinct species, with the taxonomic name Panthera sondaica.

The smaller body size of the Javan tiger is attributed to Bergmann’s rule and the size of the available prey species in Java, which are smaller than the cervid and bovid species on the Asian mainland. However, the diameter of its tracks are larger than those of Bengal tiger in Bangladesh, India, and Nepal.

Charles Frederick Partington wrote that Javan and Sumatran tigers were strong enough to break legs of horses or buffaloes with their paws, even though they were not as heavy as Bengal tigers.

At the beginning of the 20th century, 28 million people lived on the island of Java. The annual production of rice was insufficient to adequately supply the growing human population, so that within 15 years, 150% more land was cleared for rice fields. In 1938, natural forest covered 23% of the island. By 1975, only 8% forest stand remained, and the human population had increased to 85 million people.

Until the mid-1960s, tigers survived in three protected areas that had been established during the 1920s–1930s: Leuweng Sancang Nature Reserve and Ujung Kulon and Baluran National Parks. Following the period of civil unrest, however, no tigers were sighted there. In 1971, an older female was shot in a plantation near Mount Betiri in Java's southeast. Since then, not a single cub has been recorded. The area was upgraded to a wildlife reserve in 1972, at which time a small guard force was established and four habitat management projects were initiated. The reserve was severely disrupted by two large plantations in the major river valleys, occupying the most suitable habitat for the tiger and its prey. In 1976, tracks were found in the eastern part of the reserve, suggesting the presence of three to five tigers. Only a few banteng survived close to the plantations, but tracks of rusa deer, the preferred prey of the Javan tiger, were not sighted.