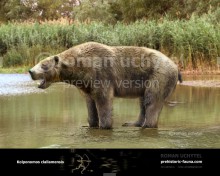 Kolponomos is an extinct genus of marine bears which existed from the Hemingfordian age to the Aquitanian age of the Miocene epoch, about 20 million years ago. It was described in 1960 by Ruben A. Stirton, a paleontologist at the American Museum of Natural History, from a partial skull and jaw found on the Olympic Peninsula. Stirton thought the fossil was a large marine procyonid, but a specimen found in two pieces by fossil collector Douglas Emlong near Newport, Oregon, in 1969 and 1977, proved the genus was related to ancestors of bears. Since that time, one other Kolponomos fossil has been discovered, in the Aleutian Islands, bringing the total number of specimens to three.

Kolponomos had downturned snouts and broad, heavy molars that would have been suited to a diet of hard-shelled marine invertebrates, and their narrow snouts and anteriorly directed eyes indicate that they would have been able to view objects directly in front of their heads. Large neck muscle attachments and robust foot bones combine with these features to suggest that Kolponomos filled a unique niche among marine carnivores, approached today only by the unrelated sea otter. Due to the lack of a complete skeleton, however, it is difficult to make inferences about this group's other adaptations.