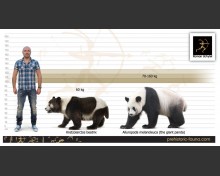 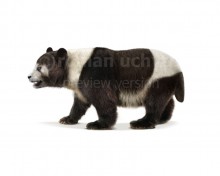 Kretzoiarctos beatrix is an extinct bear from the European Miocene and an ancestor of the extant giant panda. Kretzoiarctos beatrix is the ancestral group of the Ailuropodinae subfamily according to fossil records from the middle Miocene of Spain. Based on teeth structure, researchers have speculated that this species may have been a small herbivorous animal that ate very hard plants.The giant panda (Ailuropoda melanoleuca) has a special craniodental structure that serves as a durophagous feeding adaptation for bamboo, and a similar tooth structure was also found in K. beatrix., indicating that this species may be the oldest relative of the giant panda and might have resembled it in appearance.

Unlike most of the Ursoidea species, K. beatrix had strong distal cusps on the premolars and a relatively forward-positioned metaconid. In addition, K. beatrix had a more strongly developed sectorial blade in the trigonid, and relatively shorter second molar talonid. These traits indicate a need for pronounced chewing and grinding, and suggest that these enhanced molars and premolars were evolved to more efficiently break down hard plant tissues. The fossil records for these teeth structure suggest that the early development of the distal and mesial cusps on the premolars of K. beatrix may indicate an evolutionary trend towards more complex premolars for the plant-feeding Ursoidea species, and may explain why extant giant pandas have very complex molars.

A hypothetical explanation for the extinction of K. beatrix is based on climate and environmental changes. In the early Turolian, high precipitation and humid environments in Western Europe favored smaller plant-feeding animals like Kretzoiarctos species. However, severe climate changes during the late Miocene led to widespread extinctions. A crucial event in this period is the Messinian salinity crisis, a huge decrease in Mediterranean Sea level due to evaporation and desiccation. This has been put forward as a possible cause for the significant decline in Ursidae species diversity in the late Miocene, including the species of the genus Kretzoiarctos.