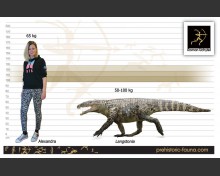 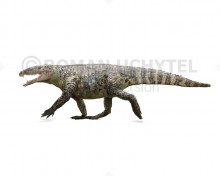 Langstonia (Paolillo & Linares, 2007)
Class: Reptilia
Clade: †Sebecosuchia
Family: †Sebecidae
Dimensions: length – 2,7 m,  weight –50-140 kg
Temporal range: lived in South America from middle Miocene (~13–12 million years ago)
A typical representative: Langstonia huilensis (Paolillo & Linares 2007)
Langstonia is an extinct genus of notosuchian crocodylomorph of the family Sebecidae. It lived in the middle Miocene in the "Monkey Beds" of the Colombian Villavieja Formation. Langstonia was named in 2007 by Alfredo Paolillo and Omar Linares for fossils originally described by Langston in 1965 as Sebecus huilensis. Thus, the type species is L. huilensis.(Paolillo & Linares 2007)
Due to the fragmentary remains generally known for this family, its possible only describe some general aspects of the appearance and biology of Langstonia. The fossil type of the species is larger than Sebecus icaeorhinus with jaws and teeth even more flattened, although its general proportions are reminiscent of this species, which suggests that their skull would be higher and laterally flattened, in contrast to modern crocodilians, which generally have a horizontally flattened skull with conical teeth. These forms were land animals that used their teeth to cut and tear their prey, because the traditional method of capture of the crocodiles, using its pressure force to retain and drown his victims is not viable on land; these crocodylomorphs also had more elongated limbs, stiff back, ideal to hold the weight and give strength to run. Langston had already suggested that these teeth were indicative that this animal had more terrestrial habits than those of existing species and the Miocene contemporary crocodylians. The fact that his skull was high implied that these animals seek not to make pressure during the bite indefinitely, but to produce cuts then back quickly so that the bleeding weakens their prey slowly up to devour, similar to what has been thought to be the case for the extant Komodo dragon, thereby adopting a strategy of stalking in areas where prey transit frequently.(Busbey 1986, p. 27)
Since in the fauna of La Venta, although there were some large mammalian predators (sparassodonts, Lycopsis longirostrus and Dukecynus), neither of them equated in size to the contemporary crocodylomorphs, and given the absence of large predatory birds phorusrhacids as in the southern part of the continent, these sebecids were probably the terrestrial apex predators in its ecosystem. The fossils found of other species - big fishes, manatees, large browsing meridiungulates as Granastrapotherium and Huilatherium, and some grazers as Pericotoxodon - indicate that the climate was warm and humid with heavy rainfall and with droughts periods no extending beyond 3–4 months, consisting of watersheds, forests and certain adjacent areas of open grasslands where it could hunt down a large variety of megafauna.
The disappearance of the system of large rivers of the Amazon lake system and the gradual uplift of the Andes caused major ecological changes in South America in the mid-Miocene. The last sebecids, Langstonia and Barinasuchus were likely apex predators in their environment, and as an effect they would be particularly susceptible to ecological changes that caused other lineages, particularly hoofed mammals (such as groups Astrapotheria, Leontiniidae, Adianthidae and Notohippidae) to die out, thus leading to extinction to the last notosuchians crocodilomorphs of the world.
Tags:
reptilia, crocodiles, notosuchia, sebecus, crocodylomorph, langstonia, predators, South America, miocene
Related images