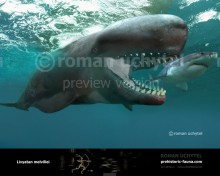 Livyatan is an extinct species of physeteroid whale, which lived during the Miocene epoch, approximately 12-13 million years ago.

In November 2008, fossil remains of Livyatan melvillei were discovered in the sediments of Pisco formation at Cerro Colorado, 35 kilometres south-southwest of Ica, Peru. The remains include a partially preserved skull with teeth and mandible. Rotterdam Natural History Museum researcher Klaas Post stumbled across them on the final day of a field trip there in November 2008. Post was part of an international team of researchers, led by Dr Christian de Muizon, director of the Natural History Museum in Paris, and included other palaeontologists from Utrecht University and the natural history museums of Rotterdam, Museo storia naturale di Pisa, the Museum of Natural History of the National University of San Marcos in Lima and Brussels.

The fossils have been dated at 12–13 million years old and were prepared in Lima, Peru, and are now part of the collection of the Natural History Museum there.

Researchers originally assigned the English name of the biblical monster (Leviathan) to this prehistoric whale as Leviathan melvillei, dedicating the discovery to Herman Melville, author of Moby-Dick—the researchers behind the excavation of L. melvillei were all fans of this novel. However, the scientific name Leviathan was a junior homonym of Leviathan Koch, 1841 for a genus of mastodon.  Junior homonyms need to be replaced with new names, except under certain special circumstances. In August 2010, the authors rectified this situation by coining a new genus name for the whale, Livyatan, from the original Hebrew spelling.

L. melvillei is one of the largest raptorial predators yet known, with whale experts using the phrase "the biggest tetrapod bite ever found" to explain their find. The teeth of L. melvillei are up to 36 centimetres long and are claimed to be the largest of any animal yet known.  Larger 'teeth' (tusks) are known, such as walrus and elephant tusks, but these are not used directly in eating.

The fossil skull of L. melvillei has a curved basin which suggests it might have had a large spermaceti organ, a series of oil and wax reservoirs separated by connective tissue. This organ is thought to help modern sperm whales to dive deeply to feed. However, L. melvillei is likely to have hunted large prey near the surface, so it appears that this organ would have had other functions. Possible suggestions include echolocation, acoustic displays (with the spermaceti organ acting as a resonance chamber) or aggressive headbutting, possibly used against competing males in mating contests or to batter prey.

Fossil remains of many other animals—including baleen whales, beaked whales, dolphins, porpoises, sharks, sea turtles, seals and sea birds—have been found at the same site where the remains of L. melvillei have been excavated.

L. melvillei would have been a top predator of its time along with the giant shark, C. megalodon, which was contemporaneous with L. melvillei in the same region, and the whale probably had a profound impact on the structuring of Miocene marine communities. The appearance of gigantic raptorial sperm whales in the fossil record coincides with a phase of diversification and size-range increase of the baleen-bearing mysticetes in the Miocene.