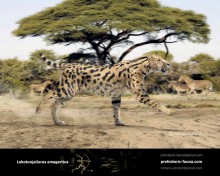 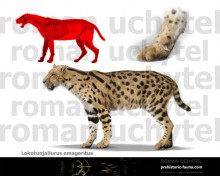 This is a large saber-toothed cat from Kenya, similar to Homotherius. The distinctive feature of this animal was a massive claw on one digit, more than twice as long as on other digits. Its upper fangs were narrow but not very long, with jags on both sides. Its limbs were comparatively shapely, devoid of features specific to Machairodus.

It was discovered at the Lotegem site west of Lake Turkana in the late Miocene depository of Northern Kenya. However, some of the specimens are dated 2.5 mln years old, which is the middle Pliocene.

The available specimens of Lokotunjailurus are mainly composed of fragments, comparative study of which indicates its similarity to Homotherius and allows the attribution of this species to the Homotheriini tribe, which includes Machairodus, Amphimachairodus and Lokotunjailurus. Being similar to Machairodus, this species at the same time differs by some dental peculiarities. This could evidence the evolutionary connection between Machairodus and Homotherius.

Consequently, we can imagine Lokotunjailurus as a long-legged cursorial carnivore, with relatively large brain part of the skull and enlarged visual area suggesting a certain degree of nocturnal hunting. Its cursoriality is evidenced by the morphology of its joints, as well as by its proportions and the diminished musculature of its limbs. Reconstruction of its hill bone also suggests reduced ability to jump compared to modern felines. However, the structure of its shoulder bones suggests that, despite its undoubted cursorial features, Lokotunjailurus still relied somewhat on the strength of its front paws when hunting. Its prey could include zebra-like horses, as well as various ruminant and swine-like even-toed ungulates.