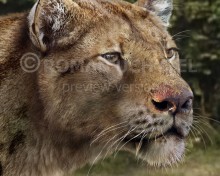 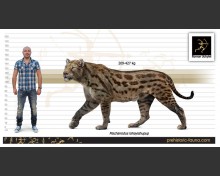 Machairodus lahayishupup  (Machairodus lahayishupup ( John D. Orcutt • Jonathan J.M. Calede, 2021)
Order: Carnivora
Family: Felidae
Subfamily: †Machairodontinae
Tribe: †Machairodontini
Genus: †Machairodus
Temporal range: It inhabited North America during the Miocene epoch (5 million and 9 million years ago)
Size: ‭ ‬2.5 ‬meters long, 1.4‭ ‬meters tall at the shoulder.  Weight estimated at up to‭ ‬427‭ ‬kg
A giant saber-toothed cat lived in North America between 5 million and 9 million years ago and weighing up to 410+ kg (900 pounds).
The researchers completed a painstaking comparison of seven uncategorized fossil specimens with previously identified fossils and bone samples from around the world to describe the new species. Their finding makes a case for the use of the elbow portion of the humerus -- in addition to teeth -- to identify fossils of large saber-toothed cats whose massive forearms enabled them to subdue their prey.
The newly identified cat weighed an average of around 272 kg (600 or so pounds) and could have managed to kill prey weighing up to 2700 kg (6,000 pounds), the scientists estimate, suggesting that their findings provide evidence for another giant cat, one of the largest in Earth history.
"We believe these were animals that were routinely taking down bison-sized animals," said study co-author Jonathan Calede, an assistant professor of evolution, ecology and organismal biology at The Ohio State University's Marion campus. "This was by far the largest cat alive at that time."
Calede completed the study with John Orcutt, assistant professor of biology at Gonzaga University, who initiated the project. Orcutt found a large upper arm bone specimen that had been labeled as a cat in the University of Oregon Museum of Natural and Cultural History collection when he was a graduate student, and collaborated with Calede on the years-long effort to figure out what kind of cat it could be.
They have determined that the new species is an ancient relative of the best-known saber-toothed cat Smilodon, the famous fossil found in the La Brea Tar Pits in California that went extinct about 10,000 years ago.
The Oregon specimen was excavated on the traditional lands of the Cayuse, a tribe joined with the Umatilla and Walla Walla in the Confederated Tribes of the Umatilla Indian Reservation. In recognition of its origin, Calede and Orcutt collaborated with the Tamástslikt Cultural Institute to name the new species Machairodus lahayishupup. Machairodus is a genus of large saber-toothed cats that lived in Africa, Eurasia and North America, and in the Old Cayuse language, Laháyis Húpup means "ancient wild cat."
The study is published today (May 3, 2021) in the Journal of Mammalian Evolution.
Orcutt and Calede found similar uncategorized upper arm fossil specimens at the Idaho Museum of Natural History, where a big cat forearm was accompanied by teeth -- generally considered the gold standard for identifying new species -- as well as at the University of California Museum of Paleontology and Texas Memorial Museum.
"One of the big stories of all of this is that we ended up uncovering specimen after specimen of this giant cat in museums in western North America," Orcutt said. "They were clearly big cats. We started with a few assumptions based on their age, in the 5 1/2 to 9 million-year-old range, and based on their size, because these things were huge.
"What we didn't have then, that we have now, is the test of whether the size and anatomy of those bones tells us anything -- and it turns out that yes, they do."
The largest of the seven Machairodus lahayishupup humerus fossils available for the analysis was more than 18 inches long and 1.7 inches in diameter. By comparison, the average modern adult male lion's humerus is about 13 inches long.
The researchers hypothesized that if an isolated forearm bone were useful in telling species apart, that would be true among the big cat species alive today. Calede and Orcutt visited numerous museums in the U.S., Canada and France to photograph forearm specimens of lions, pumas, panthers, jaguars and tigers, as well as fossils of previously identified extinct big cats.
Calede used software to place landmark points on each digitized sample that, when drawn together, would create a model of each elbow.
"We found we could quantify the differences on a fairly fine scale," Calede said. "This told us we could use the elbow shape to tell apart species of modern big cats.
"Then we took the tool to the fossil record -- these giant elbows scattered in museums all had a characteristic in common. This told us they all belonged to the same species. Their unique shape and size told us they were also very different from everything that is already known. In other words, these bones belong to one species and that species is a new species."
The researchers calculated estimates of the new species' body size based on the association between humerus size and body mass in modern big cats, and speculated about the cat's prey based on its size and animals known to have lived in the region at that time: rhinoceros were particularly abundant, as well as giant camels and giant ground sloths.
https://link.springer.com/article/10.1007/s10914-021-09540-1
https://www.sciencedaily.com/rel.../2021/05/210503113933.htm
Tags:
Amphiachairodus, predators, Machairodus, saber-toothed cats, miocene, North America, carnivore
Related images