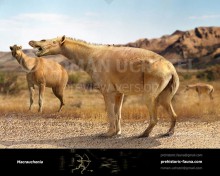 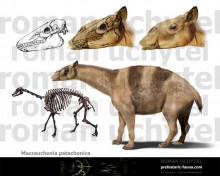 Macrauchenia patagonica is an representatives of the order litopterna, which belonged to a very specific South American ungulates. Most of the representatives litoptern extinct at the end of the Pliocene, after an overland to North America, the emergence of new predators and competition from new prey. Macrauchenias were quite attuned to adapt to survive until the end of the Pleistocene. Macrauchenia patachonica died, apparently, only 10 thousand years ago.
This ungulate reached 1,8 m height at the shoulders, which corresponds to the modern camel, and weighed a ton. Long and very strong legs ended with three fingers. The neck was very long, and the front segment is probably end with proboscis, adapted for plucking leaves, although the structure of teeth more like a grass eaters. The remains of Macrauchenias were found, first of all, in the southeastern Pampas, but the findings are also known in Venezuela.

Macrauchenia had a somewhat camel-like body, with sturdy legs, a long neck and a relatively small head. Its feet, however, more closely resembled those of a modern rhinoceros, and had three hoofs each. It was a relatively large animal, with a body length of around 3 metres and a weight up to 1042 kg.

One striking characteristic of Macrauchenia is that, unlike most other mammals, the openings for nostrils on its skull were atop the head, leading some early scientists to believe that, much like a whale, it used these nostrils as a form of snorkel. Soon after some more recent findings, this theory was rejected. An alternative theory is that the animal possessed a trunk, perhaps to keep dust out of the nostrils. Macrauchenia's trunk may be comparable to that of the modern Saiga antelope.

One insight into Macrauchenia's habits is that its ankle joints and shin bones may indicate that it was adapted to have unusually good mobility, being able to rapidly change direction when it ran at high speed.

Macrauchenia is known, like its relative, Theosodon, to have had a full set of 44 teeth.