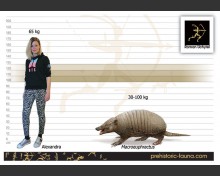 Macroeuphractus (†Macroeuphractus outesi (Ameghino, 1908))
Order: Cingulata
Family: Chlamyphoridae
Temporal range: living during the Late Miocene to Late Pliocene of South America
Dimensions: 1 m in length,  ~60 kg of weight.
A typical representative: Macroeuphractus outesi
Macroeuphractus is a genus of extinct armadillos from the Late Miocene to Late Pliocene of South America. The genus is noted for its large size, with Macroeuphractus outesi being the largest non-pampathere or glyptodont armadillo discovered, as well as its specializations for carnivory, unique among all xenarthrans.
There are three currently recognised species of Macroeuphractus: M. outesi, M. retusus and M. moreni. The former, the type species, is known from one specimen from the Late Pliocene of Buenos Aires, Argentina. This specimen is composed of a fairly well preserved skull as well as numerous post-cranial elements. It represented a considerably large species at around 100 kilograms, although it is possible that it was actually closer to 30kg, at a little over a meter in length it would still be a decently sized predator.
Macroeuphractus is traditionally grouped with euphractines; it was named after its similarity with Euphractus itself. The most recent phylogenetic examinations confirm its status as at least a sister group to euphractines, along with Paleuphractus, Doellotatus and Proeuphractus.
Macroeuphractus is one of the few known xenarthrans to have specialised extensively for a carnivorous lifestyle.
Like most armadillos, Macroeuphractus was fossorial, and it probably could dig out small and medium-sized mammals such as caviomorph rodents, small notoungulates and argyrolagoidean paucituberculates. Species like Macroeuphractus outesi were fairly large and presumably had an apex predator status in their faunal communities.
Macroeuphractus moreni was a rather widespread species, and played a role in various faunal communities in the Miocene and Pliocene epochs of South America, while the other two species had a more limited range in Argentina. The genus occurs in an epoch where sparassodonts, phorusrhacids and sebecids entered in decline, and was among the various mammal groups to exploit this ecological vacancy prior to the arrival of North American carnivorans in the Pleistocene, alongside giant opossums such as Thylophorops. Nonetheless, Macroeuphractus still co-existed with late surviving sparassodonts such as Thylacosmilus and phorusrhacids like Llallawavis.
Tags:
miocene, Macroeuphractus, euphractines, non-pampathere, xenarthrans, giant armadillo-like creatures, South America, cingulates, pliocene
Related images

Glyptotherium
$0.00
Add to Cart
Reviews (3)
Write a review:
Your Name: