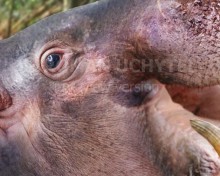 Malagasy hippopotamus
†Hippopotamus madagascariensis (Solweig Stuenes, 1989))
†Hippopotamus lemerle (Stuenes, 1989)
†Hippopotamus laloumena (Faure and Guerin, 1990)
Order: Artiodactyla
Family: Hippopotamidae
Time period: during the late Pleistocene- Holocene (Madagascar)
Size: 150 - 200 cm in length, 70 cm in height, 170 - 250 kg of weight
Typical representative: Hippopotamus madagascariensis
The Malagasy hippopotamus was first described in the mid-19th century by Alfred Grandidier, who unearthed nearly 50 individual hippos from a dried-up swamp at 'Ambolisatra' (thought to be Ambolisaka, near Lake Ihotry), a few miles from the Mozambique Channel. As many as four different species of hippopotamus were subsequently identified by various researchers. In a careful revision of the fossil record of the Malagasy hippos, Solweig Stuenes concluded that there were only two species of hippopotamus which she classified as Hippopotamus lemerlei and Hippopotamus madagascariensis. In 1990, Faure and Guerin discovered a distinct third species of hippo, which they named Hippopotamus laloumena. In a review of Stuenes work, Harris suggested that Hip. madagascariensis had much in common with the extant pygmy hippopotamus of West Africa. Since the extant pygmy hippopotamus was placed in the genus Hexaprotodon, he used the name Hex. madagascariensis. Some taxonomists, however, consider the modern pygmy hippo to belong to the genus Choeropsis, so this species may also be classified as C. madagascariensis.
Like the modern pygmy hippopotamus, the Malagasy pygmy hippo had eyes on the side of its head rather than high orbits and teeth of the common hippopotamus. The Malagasy pygmy hippo was similarly less aquatic, with many of its fossils found in the forested highlands of Madagascar.
Fossils of both the Malagasy pygmy hippopotamus and H. lemerlei show a cursorial adaptation, distinct from the hippos on the African continent, and they would have been much better runners.
The fossil record of the Malagasy hippopotamus is extensive. At least seven hippopotamus bones show unequivocal signs of butchery, suggesting that they survived until humans arrived on Madagascar. The evidence of humans butchering the hippos also suggests their extinction may have been due to humans. Despite the discovery of many fossils, the hippos of Madagascar are not very well studied.
Although there have been no remains dating to within the last thousand years, the hippopotamus has been surprisingly common in Malagasy oral legends. In different regions of Madagascar, stories were recorded of the mangarsahoc, the tsy-aomby-aomby, the omby-rano, and the laloumena, all animals that resembled hippopotamuses. The strength of these oral traditions led the International Union for Conservation of Nature (IUCN) to classify H. madagascarensis as recently extinct (going extinct some time after the year 1500).
Tags:
Holocene, Pleistocene, herbivore, Madagascar, Artiodactyla, hippopotamus, even-toed ungulate, ungulate
Related images