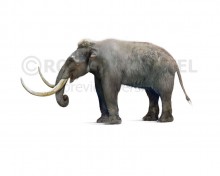 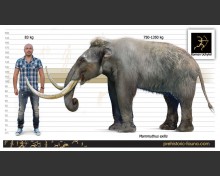 Mammuthus exilis (†Mammuthus exilis (Stock & Furlong, 1928))
Order: Proboscidea
Family: Elephantidae
Genus: †Mammuthus
Dimensions: length - 3,3 m (with tusks), height - 1,7 - 2 m, weight - 760 - 1350 kg
Temporal range: during the Late Pleistocene to Early Holocene (0.06–0.011 Ma, the Channel Islands of California).
The pygmy mammoth or Channel Islands mammoth (Mammuthus exilis) is an extinct species of dwarf elephant descended from the Columbian mammoth (M. columbi) of mainland North America. This species became extinct during the Quaternary extinction event in which many megafauna species became extinct due to changing conditions to which the species could not adapt.  A case of island or insular dwarfism, from a recent analysis in 2010 it was determined that M. exilis was on average, 1.72 m tall at the shoulders and 760 kg  in weight, in stark contrast to its 4.3 m tall, 9,070 kg ancestor. Another estimate gives a shoulder height of 2.02 m and a weight of 1,350 kg.
Remains of M. exilis have been discovered on three of the northern Channel Islands of California since 1856: Santa Cruz, Santa Rosa, and San Miguel, which together with Anacapa were the highest portions of the now mostly submerged superisland of Santa Rosae. The late Pleistocene elephant appears to have survived on the islands until the arrival of the humans associated with Arlington Springs Man around 13,000 years ago and the last known mammoth occurrence was 13–12.9 thousand years ago which predates the later Chumash people's arrival during the early Holocene, between 10,800 and 11,300 years ago. Radiocarbon dating indicates M. exilis existed on the island for at least 47,000 years prior (which is the approximate limit of the dating method).
Land bridges were once theorized to have connected the northern Channel Islands to the mainland, because it was assumed the mammoths could not swim. "A land bridge between the mainland and Santa Rosae did not exist during the Quaternary"; however, the distance to the mainland was reduced to 7 km. When the Ice Age caused the sea levels to lower, the four northern Channel Islands formed a single island that was closer to the mainland and also larger in size. Pygmy mammoths are descendants of the Columbian mammoth. These were capable swimmers able to swim to the new island and adapt to the new environment.
The cause of extinction of the pygmy mammoth is unknown, but it could have been caused by over-hunting by humans, wildfire, climate change, or some combination thereof.
Tags:
North America, pleistocene, herbivorous, elephantidae, proboscidea, mammuthus exilis, ice age
Related images