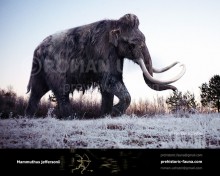 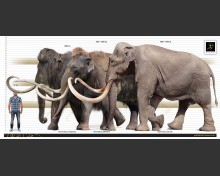 Jeffersonian mammoths occur throughout the eastern Great Plains and Midwest, although there are occasional records in the desert southwest and southeastern US (Saunders 1970). As with the Columbian mammoth to the west, scientists think that M. jeffersonii preferred an open, grassland habitat. Most midwestern records of this mammoth indicate a presence from the last interglacial, about 130,000 years ago, to the last glacial maximum, about 18,000 years ago. Midwestern environments during this time would have included relatively cold, arid habitats, including forest tundra, and spruce parkland.

Unlike Woolly Mammoths, there are no mummified remains of Jeffersonian mammoths, so details of their outward appearance are unknown. Their presence in Midwestern loess deposits dating to the Last Glacial Maximum suggests some degree of cold-adaptation, similar to Woolly Mammoths; so it is likely that they had a thick coat of hair. Modern elephants are not very sensitive to temperature swings and to not exhibit discomfort in temperatures below freezing, nor do they grow longer hair in those conditions.

Since the Jeffersonian mammoth has been found primarily in localities representative of cold, relatively open environments, it is likely that this species of mammoth had a diet dominated by cool-season grasses and sedges. This is supported by a limited dataset of stable carbon isotopes on M. jeffersonii bone collagen.

The researchers suggest that the M. jeffersonii may have been a hybrid between the two species (Columbian and woolly mammoths), as it is apparently morphologically intermediate.