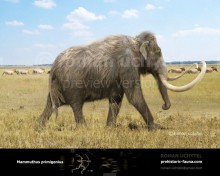 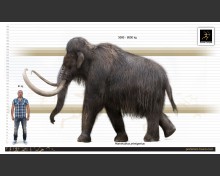 Siberian or woolly mammoth - one of the most recognizable extinct mammals and most characteristic of large animals of the Quaternary period. Thanks to the well-preserved paleontological materials in the form of bone remaining in the permafrost mummies and paleo-art facilities, we can reconstruct its shape with high reliability. In comparison to modern elephants, woolly mammoth looked like little more than short-legged. Its whole body is covered with a thick coat with a dense undercoat: the length of hair on the shoulders, flanks and hips reached 70 cm, forming a kind of fringe observed in modern yak. The tail also had a brush of stiff and thick hair. Coat color changed from black-n-brown to reddish; cubs were painted lighter. The head was massive, with relatively shorter trunk and furry little ears; located on the back of a fatty hump (additional adaptation to the cold climate). It is noteworthy that the huge tusks had a peculiar spiral curved. Tusks of the large males can reach 4 m. The evidence of intensive use its tusks are traces of abrasion even in teenage individuals. Lifestyle and social structure of mammoths were apparently similar to what can be observed in the surviving elephants today. The point about the dominance in their groups of the old matriarch female pilot confirms discovery of dead mammoths whole family from the Bryansk region, which consisted of adult females, subadult males and cubs. The habitat of the mammoth - is open grassy plains, as the characteristic landscape of the late Pleistocene considered tundra, combines the features of a modern tundra and forest-steppe. In connection with a characteristic sequence of animals, this giant ecosystem stretching from Britain to Alaska, also called the "mammoth steppe" . Its vast areas were heterogeneous in productivity, and the most fodder places are river valleys. Most likely that in the warm season the animals feed mainly sedges and grasses, while in winter the diet includes shoots of trees and shrubs; in cold areas were primarily polar birch and willow. Woolly Mammoth is a contemporary of the Human from the Stone Age, inspired the ancient artists to create gorgeous cave art and artfully made figurines. Sometimes its bones were used as building material - known archaeological remains of ancient huts fortified ivory. Manufactured from bones also spearheads and arrowheads, needles and jewelry. Mammoth bones in Paleolithic encampments bear traces of stone tools, the long bones are burned and split, the set of residues found in the "kitchen" garbage, confirming that the mammoth was used in the food. For late Pleistocene - early Holocene was characterized by abrupt climate changes.

According to the scientists, explore the ancient climate, these very changes have led to the disappearance of the typical representatives of the mammoth fauna in the vast territory. When nominating such hypotheses their supporters prefer not to mention that mammoths survived at least nine cycles as strong climatic reconstructions. Another school recognizes that the mammoth fauna in general and, in fact, the mammoth in particular, "also experienced the impact of human hunting activities." The sharp decline in the number and distribution of the woolly mammoth occurred during the last glaciation attenuation, from 16000 to 9500 years ago. Radiocarbon data show that only in Arctic Siberia remains of mammoths are aged less than 12 000 years. The latest dating of the existence of a mammoth is a small Holocene population on Wrangel Island, survived until the arrival of the human about 700 years ago. The most likely scenario is "the last straw": during sudden rearrangements of climate with the changes at the glacial climate model to the current interglacial, large animals were concentrated in the "refugia" - relatively small areas with favorable conditions, waiting through the hard times. In previous cycles of glaciation-warming after stabilization of the new climate model, the animals were settled out of these "safe havens" and reduced its numbers, but at the end of the last glaciation Eurasia and the hole world has been populated by highly specialized hunters of the Paleolithic. Naturally, they also come in these remaining "nidi of hunting paradise." As a result of experiencing climatic stress animals, apparently, just do not stand the extra pressure of human hunting and died out completely.

Unfoundedness the only climate models extinction of the amazingly rich and stable Pleistocene fauna proved not only silencing phenomenon previous cycles, when extinctions not happened, but asynchrony and alogism of the global extinction upon the occurrence of the current Holocene warming in relation to a variety of species and populations with opposing demands of the environment. In particular this applies to the woolly mammoth.