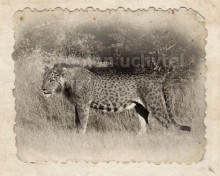 The marozi or spotted lion is variously claimed by zoologists and cryptozoologists to be a distinct race of lion adapted for a montane rather than savanna-dwelling existence, a rare natural hybrid of a leopard and lion, or an adult lion that retained its childhood spots. It is believed to have been smaller than a lion but slightly larger in size than a leopard and lacking any distinguishable mane. It has been reported in the wild and the skin of a specimen exists, but it has yet to be confirmed as either a separate species or subspecies. Belgian cryptozoologist Dr Bernard Heuvelmans proposed the specific name Leo maculatus in 1955.

While Africans have been familiar with the animal and Europeans have been reported seeing spotted lions since roughly 1904, the first documentable encounter by a European was in 1931 when Kenyan farmer Michael Trent shot and killed two individuals in the Aberdare Mountains region at an elevation of 3,000 m. The unusual spotted markings on what seemed to be smallish adult lions prompted interest from the Nairobi Game Department; they were from pubescent lions and yet had prominent spots that are typical only of cubs.

Two years later, explorer Kenneth Gandar-Dower headed an expedition into the region in an attempt to capture or kill more specimens. He returned with only circumstantial evidence: three sets of tracks found at a similar elevation as Trent's lions (10.000-12.500 feet or 3.000-3.800 metres). They were believed to have been left by individuals that were tracking a herd of buffalo during a hunt, ruling out the possibility of the marozi being cubs. Dower also discovered that the natives had long differentiated the marozi from lions or leopards, which they referred to by different names. Aside from that, he found out that the marozi had also been called different names in other regions, such as "ntararago" in Uganda, "ikimizi" in Rwanda, and "abasambo" in Ethiopia. Notes on the marozi are included in The Spotted Lion by Kenneth Gandar Dower; On The Track of Unknown Animals by Bernard Heuvelmans and Mystery Cats of the World by Dr Karl Shuker. R.I. Pocock examined a skin and skull collected by Michael Trent, and discussed his findings in an appendix to Gandar Dower's book, but he could not reach definite conclusions on the limited evidence available.

The hypothetical Phylogeny of the extinct lion-like cats
$0.00