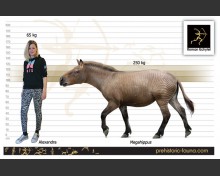 Megahippus (†Megahippus (McGrew, 1938))
Order: Perissodactyla
Family: Equidae
Subfamily: †Anchitheriinae
Dimensions: 2,4 m in length, 120 cm in height, 150 - 260 kg of weight
Expansion: early and middle Miocene of North America  (15–11 Ma)
Fossils of Megahippus are uncommon. They are known from the Miocene of the Great Plains. Species in this genus lived from 15-11 million years ago. The most common way to determine whether a horse is a browser or grazer is whether they have low- or high-crowned teeth, but that’s not the only way.
Studies of living hoofed herbivores show that those with wide muzzles usually eat grass, whereas those with narrow snouts tend to eat soft vegetation, like leaves, sprouts, and fruits. Megahippus had a very narrow snout that was used to select rich food items (like fresh sprouting leaves) rather than twigs and old leaves that are not as nutritious.
Megahippus also had low-crowned teeth, so it would have been difficult for it to eat abrasive grass. Grass would have rapidly worn its teeth down.
Because Megahippus and other low-crowned “anchitheres” were three-toed browsers, they are sometimes considered to have been “stuck” in an evolutionary dead-end relative to their grazing contemporaries. They, however, evolved just as rapidly as the grazing horses. The grinding surfaces of their cheek teeth got larger, as did their overall body size. Megahippus, as its name suggests, was a fairly large horse  for its time.
Tags:
herbivorous, three-toed ungulate, anchitherium, megahippus, north america, extinct horses, miocene
Related images