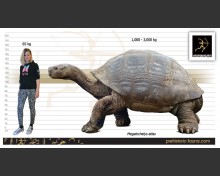 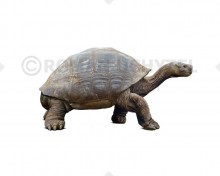 Megalochelys (†Megalochelys (Falconer & Cautley, 1837))
Class: Reptilia
Order: Testudines
Suborder: Cryptodira
Superfamily: Testudinoidea
Family: Testudinidae
Dimensions: length - 2 - 2,7 m, weight - 1000 -3000 kg
Expansion: during the Miocene to Pleistocene (India, Pakistan, Sulawesi and Timor in Indonesia
Megalochelys is an extinct genus of cryptodiran tortoises that lived from the Miocene to Pleistocene. They are noted for their giant size, which is among the largest of any known testudine, with a maximum carapace length over 2 m in M. atlas. During the dry glacial periods it ranged from western India and Pakistan (possibly even as far west as southern and eastern Europe) to as far east as Sulawesi and Timor in Indonesia, though the island specimens likely represent distinct species.
One species of Megalochelys, M. atlas, is the largest known tortoise, with a shell length of about 2.1 m, an estimated total length of 2.5 to 2.7 m, and an approximate total height of 1.8 m. Popular weight estimates for this taxon have varied greatly with the highest estimates reaching up to 4,000 kg in some instances. However, weights based on volumetric displacement of the skeleton, or inferences based on two-dimensional skeletal drawings, indicate that M. atlas was probably closer to 1,000 to 2,000 kg in mass. M. atlas is thus the largest known tortoise. The only larger turtles were the marine Archelon and Protostega from the Cretaceous Period, and the aquatic, freshwater Stupendemys of the South American Late Miocene.
Like the modern Galápagos tortoise, M. atlas' weight was supported by four elephantine feet. Since most members of the related genus Testudo are herbivores, paleontologists believe M. atlas had the same diet.
Tags:
testudine, Asia, Reptilia, megalochelys, megafauna, tortoises, miocene, pliocene, pleistocene, turtle
Related images