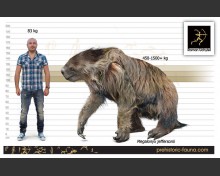 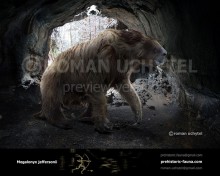 Megalonyx  is an extinct genus of ground sloths of the family Megalonychidae, which was endemic to North America from the Hemphillian of the Late Miocene through to the Rancholabrean of the Pleistocene, living from ~10.3 Mya—11,000 years ago, existing for approximately 10.289 million years. The type species, M. jeffersonii, measured about 3 meters and weighed up to 1,000 kilograms.

Megalonyx evolved from ancestors that island-hopped across the Central American Seaway from South America, where ground sloths arose, prior to formation of the Panamanian land bridge. Its appearance in North America thus predates the bulk of the faunal exchange between North and South America. Its immediate predecessor was Pliometanastes and its closest living relatives are the two-toed sloths (Choloepus).

M. jeffersoni lived from the Illinoian Stage during the Middle Pleistocene (150,000 years BP) through to the Rancholabrean of the Late Pleistocene (11,000 BP). It belongs to the genus Megalonyx, a name proposed by Thomas Jefferson, future president of the United States, in 1797. (Jefferson's surname was appended to the animal as the specific epithet in 1822 by the French zoologist Anselme Gaëtan Desmarest.) M. jeffersoni was probably descended from M. wheatleyi, which was in turn was probably derived from M. leptostomus. Megalonyx was a large, heavily built animal about 3 m  long. Its maximum weight is estimated at 1,000 kg.  This is medium-sized among the giant ground sloths. Like other ground sloths, it had a blunt snout, massive jaw, and large peg-like teeth. The hind limbs were plantigrade (flat-footed) and this, along with its stout tail, allowed it to rear up into a semi-erect position to feed on tree leaves. The forelimbs had three highly developed claws that were probably used to strip leaves and tear off branches.

Megalonyx ranged over much of North and Central America. Their remains have been found as far north as Alaska and the Yukon.

M. jeffersonii, also known as Jefferson's ground sloth, was apparently the most wide-ranging giant ground sloth. Fossils are known from many Pleistocene sites in the United States, including most of the states east of the Rocky Mountains as well as along the west coast. It was the only ground sloth to range as far north as the present-day Yukon. Jefferson's ground sloth dwelled primarily in woodlands and forest, although they likely occupied a variety of habitats within these broad systems. Two recent studies were able to link directly-dated specimens from the terminal Pleistocene with regional paleoenvironmental records, demonstrating that these particular animals were associated with spruce dominated, mixed conifer-hardwood habitat.

In late 2010, the first specimen ever found in Colorado was discovered at the Ziegler Reservoir site near Snowmass Village (in the Rocky Mountains at an elevation of  2,705 m.The Firelands ground sloth fossil dated between 11,727 and 11,424 BCE represents the earliest-known hunting activity by Ohioan Paleo-Indians.