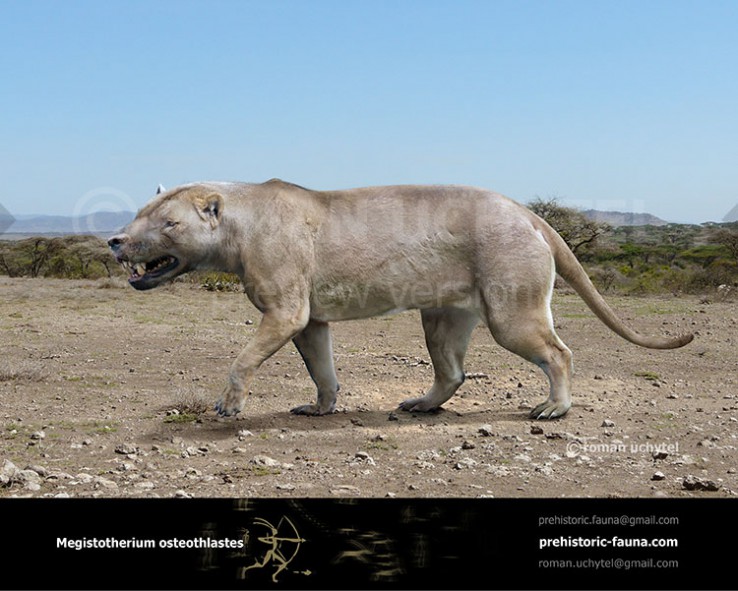 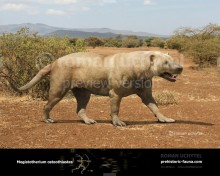 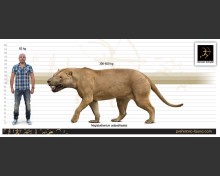 Megistotherium (Megistotherium (Savage, 1973))
?Hyainailouros osteothlastes
Order: Creodonta
Family: †Hyaenodontidae
Time period: early Miocene epoch of Africa (23 million years ago)
Size: Up to‭ 3.5 ‬meters long. 145 ‬cm tall at the shoulder.  Weight estimated at up to‭ 500‭ ‬kg.
A typical representative: Megistotherium osteothlastes (Savage, 1973)
Megistotherium  is an extinct genus of creodonts, the only known species of which is Megistotherium osteothlastes. It is most likely a junior synonym of Hyainailouros sulzeri.
Megistotherium osteothlastes was an enormous hyaenodontid creodont that lived during the early Miocene Epoch some 23 million years ago. It has been found in the Ngorora Formation and Muruyur Formation Kenya, Egypt, Namibia, Uganda and Libya. Named by Robert Savage in 1973, it is one of the largest terrestrial carnivorous mammals known to have existed. It was about 1.5 meters high at the shoulders and 3.5 meters in head and body length, with a 1 meter long tail and a 65 cm long skull. Its body mass has been estimated at 500 kg or 880 kg.
This can be compared to the other large carnivorous mammals such as: Arctodus, modern polar bears, and Amphicyon ingens.
Large hyaenodontids like this one could have originally evolved as specialized predators or scavengers of large African herbivores. Mastodon bones have been found with its fossils, indicating that Megistotherium may have hunted them for food.
Tags:
creodonts, prehistoric, Hyaenodontidae, carnivore, Africa, megafauna, predators, megistotherium, miocene
Related images