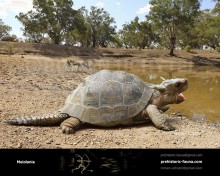 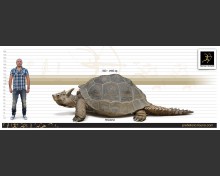 Meiolania (†Meiolania (Owen, 1886))
Class: Reptilia
Order: Testudines
Family: †Meiolaniidae
Dimensions: length - 2 - 5 m, weight - 150 -1300 kg
Expansion: during the Middle Miocene to Late Pleistocene, Holocene (Australia)
Meiolania ("small roamer") is an extinct genus of stem-turtle from the Middle Miocene to Late Pleistocene and possibly Holocene.
Meiolania had an unusually shaped skull that sported many knob-like and horn-like protrusions. Two large horns faced sideways, and would have prevented the animal fully withdrawing its head into its shell. The tail was protected by armored 'rings', and sported thorn-like spikes at the end. The body form of Meiolania may be viewed as having converged towards those of dinosaurian ankylosaurids and xenarthran glyptodonts.
There are two species of Meiolania known from the Australian continent: M. brevicollis and an unnamed species. The unnamed species could reach 2 metres in carapace length, making it the second-largest known nonmarine turtle or tortoise, surpassed only by Megalochelys atlas from Asia, which lived in the Pleistocene. The smallest species in turn was M. mackayi from New Caledonia, with a carapace length of 70 centimetres. Another insular species is known from Lord Howe Island, M. platyceps.
Meiolania fed on plants. Because the remains known by 1925 were found close to beaches, it was thought to be aquatic. It is now known to have been terrestrial.
The genus was erected in 1886 based on remains found on Lord Howe Island, which Richard Owen assigned to the two species M. platyceps and M. minor (now a synonym of the former). These were the first good meiolaniid remains, and were used to show that the first known remains of a related animal, a species from Queensland now known as Ninjemys oweni (which was assigned to Meiolania until 1992), did not belong to lizards as initially thought, but to turtles. Woodward sank Niolamia argentina into Meiolania, but this was not accepted by later authors. In New Caledonia, M. mackayi was described from Walpole Island in 1925. It was smaller and less robust than M. platyceps. Meiolania remains are also known from the Pindai Caves, Grande Terre, and from Tiga Island.
M. brevicollis was described in 1992 from the mid Miocene Camfield Beds of northern Australia, and differed from M. platyceps in having a flatter skull and other horn proportions.
A second undescribed species of Meiolania from mainland Australia is known from the Wyandotte Creek locality in Queensland, dated to the Late Pleistocene, consisting of three horn cores and a caudal vertebra, noted to be "unusually large" in size. This species is referred to as M. cf platyceps, as the remains are most similar to M. platyceps but are not diagnostic beyond genus level.
Tags:
Australia, Miocene, Meiolania, Holocene, megafauna, giant turtle, Pleistocene, Reptilia, horned turtles
Related images