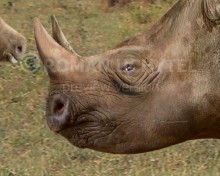 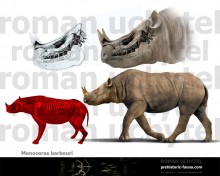 Menoceras ("Crescent Horns") is a genus of extinct, small rhinoceros endemic to most of southern North America and ranged as far south as Panama during the early Miocene epoch. It lived from around 30.7—19.7 Ma, existing for approximately 11 million years. Menoceras roamed across a tropical, savanna-like grassland and plains environment that covered much of North America (Prothero, 2005). Because of the massive accumulations of fossil bones of this animal, particularly at Agate Springs Nebraska, Menoceras may have lived in large herds. However, other sites i.e. Martin-Anthony site Martin County, Florida, and Cady Mountains Horse Quarry, San Bernardino County, California.

Male Menoceras sported two horns side by side at the tip of the nose, whereas the females were hornless. All other rhino genera, save the related genus Diceratherium, have their horns arranged one behind the other. Either gender of Menoceros grew to a length of 1.5 meters long, around the size of a large pig, or a domesticated sheep.