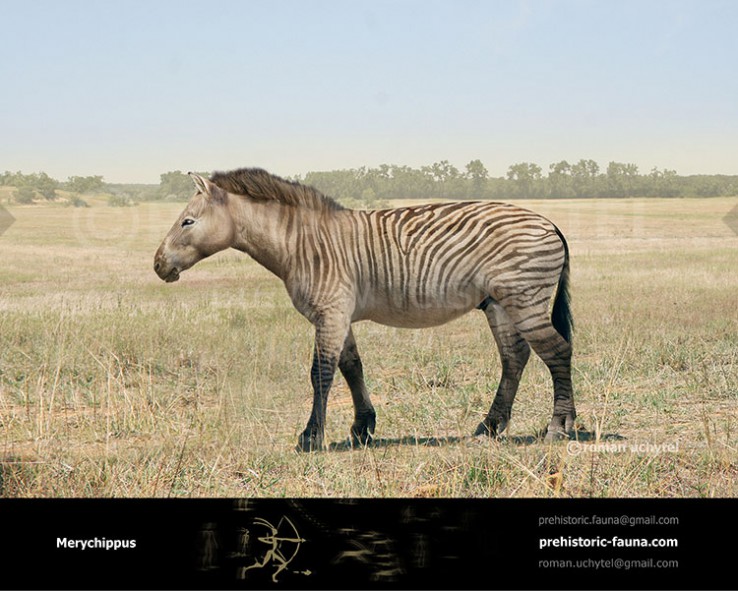 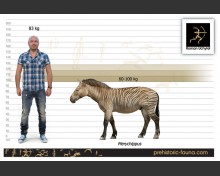 Merychippus (†Merychippus insignis (Leidy, 1856))
Order: Perissodactyla
Family: Equidae
Expansion: the Miocene of North America, (15.97–5.33 million years ago)
Dimensions: 1,9 m in length, 90 cm in height, 60 - 100 kg of weight
Merychippus is an extinct proto-horse of the family Equidae that was endemic to North America during the Miocene, 15.97–5.33 million years ago. It had three toes on each foot and is the first horse known to have grazed.
Merychippus lived in groups. It was about 89 cm tall and at the time it was the tallest equine to have existed. Its muzzle was longer, deeper jaw, and eyes wider apart than any other horse-like animal to date. The brain was also much larger, making it smarter and more agile. Merychippus was the first equine to have the distinctive head shape of today's horses.
The Miocene was a time of drastic change in environment, with woodlands transforming into grass plains. This led to evolutionary changes in the hooves and teeth of equids. A change in surface from soft, uneven mud to hard grasslands meant there was less need for increased surface area. The foot was fully supported by ligaments, and the middle toe developed into a hoof that did not have a pad on the bottom. In some Merychippus species, the side toes were larger, whereas in others, they had become smaller and only touched the ground when running. The transformation into plains also meant Merychippus began consuming more phytolith rich plants. This led to the presence of hypsodont teeth. Such teeth range from medium to intense crown height, are curved, covered in large amounts of cement, and are characteristic of grazing animals.
Equid size also increased, with Merychippus ranging, on average, between 71 and 100.6 kg.
Tags:
odd-toed ungulate, merychippus, miocene, North America, extinct horse, herbivorous
Related images