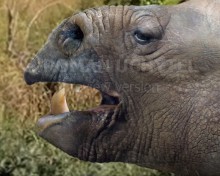 Metamynodon (†Metamynodon (Scott & Osborn, 1887))
Order: Perissodactyla
Family: †Amynodontidae
Temporal range: during the late Eocene until early Oligocene (Asia and North America)
Dimensions: length - 3-4 m, weight - 1600-1900 kg
A largest species: Metamynodon planifrons
Metamynodon is an extinct genus of rhino that lived in North America and Asia from the late Eocene until early Oligocene, was first described in 1887 by William Berryman Scott and Henry Fairfield Osborn based on a skull of M. planifrons found in the White River Formation.. The various species were large, displaying a suit of semiaquatic adaptations similar to those of the modern hippopotamus despite their closer affinities with rhinoceroses.
Metamynodon is a member of the extinct family Amynodontidae, sometimes called "swamp rhinos" as they were once all believed to be semi-aquatic. The Metamynodontini are found across the world, with Paramynodon from Myanmar, Sellamynodon from Romania, and Megalamynodon and Metamynodon from North America. Megalamynodon is likely the ancestor of Metamynodon, though it is possible it could have evolved from an Asiatic ancestor.
Metamynodon planifrons, the largest species, was about 4 metres in length and 1.8 tons in weight. Its front legs had four toes instead of the three found in modern rhinos.
Like other swamp rhinos, Metamynodon has large canines, and Metamynodonts generally have larger canines than other swamp rhinos. The shortened snout and large nostrils indicate Metamynodon had a prehensile lip. Metamynodonts were more brachycephalic and had a broader than longer snout. The nostrils would have been on the top portion of the snout like the modern hippo. As other aquatic mammals, Metamynodon had a poorer sense of smell than other swamp rhinos. The eyes were located high on the skull so it could see while also being completely submerged.
Like other aquatic mammals, Metamynodon had small neural spines projecting upwards from the thoracic vertebrae, indicating weak neck muscles, which probably was due to buoyancy and a lack of necessity to support the head while submerged. The ribcage was broad and Metamynodon had a barrel-like chest similar to the hippo, which could either be an adaptation to an expanding digestive tract or to develop muscles necessary to prevent rolling over in the water.
Like the modern hippo, Metamynodon was likely a grazer, feeding on grass and tough plant material at night and residing in the water during the day. Like hippos, males may have used their large tusks for fighting or for finding food in river banks. They went extinct in the Late Oligocene.
Metamynodon bones are common in Early Oligocene riverbed deposits of Badlands National Park in South Dakota, giving them the nickname "the Metamynodon channels."
Tags:
oligocene, metamynodon, Amynodontidae, rhinoceroses, eocene, Asia, North America, semiaquatic
Related images