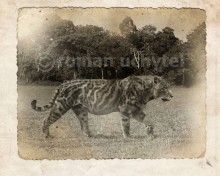 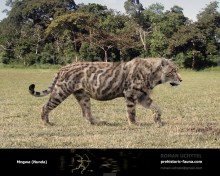 Mngwa (the strange one) or Nunda is a gigantic, ferocious, dark gray or black nocturnal feline, said to stalk Tanzania. Described as, "the size of a donkey," English contact with this animal first began in the 1900s. In 1938, an open-minded discussion of this animal appeared in the then-world-famous British scientific journal Discovery. William Hichens, a British administrator working in Tanzania reported that several natives were attacked by this animal. He thought it to be a giant, man-eating lion that was responsible, but both fur-samples and tracks were different from those of a lion (Welfare & Fairley, 1981).

In Frank W. Lane's 1954 issue of Nature Parade, Patrick Bowen, a hunter who tracked the Mngwa at one time, remarked that the animal's tracks were like those of the leopard but much larger. The Mngwa was also described to have brindled fur that was visibly different from that of a leopard. Lane believed that the attacks reported in the 19th century by the Chimiset, associated with the Nandi Bear, might actually have been attacks by the Mngwa.

Bernard Heuvelmans speculated Mngwa to be an abnormally colored specimen of a known species, or that it may even be a larger subspecies of the African golden cat (Profelis aurata).

The Nunda, Eater of People is one of the Swahili fairy tales collected by Edward Steere in his 1870 anthology Swahili Tales, as told by the natives of Zanzibar. It is possible that this folktale was also the inspiration for the Nundu, a leopard-like magical creature mentioned in J. K. Rowling's Harry Potter novels.