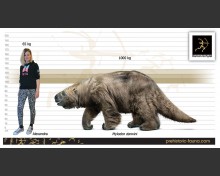 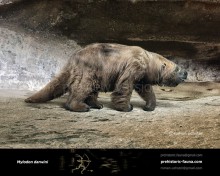 Mylodon (†Mylodon darwini (Owen, 1840))
Order: Pilosa
Family: †Mylodontidae
Temporal range: during the Late Pleistocene-Holocene (South America, (Patagonia))
Dimensions: length - 3 m, weight - 1000 kg
Mylodon is an extinct genus of ground sloths that lived in South America. The most recent credible date obtained from its remains has been reported to be 10,200 BP.
Mylodon's close relatives include the ground sloths of the genera Glossotherium and Paramylodon. The latter genus has often been confused with Glossotherium, but Paramylodon is a distinct genus that was restricted to the Pleistocene of North America. Glossotherium also shares a long history of taxonomic confusion with Mylodon, and currently the only recognized species is Mylodon darwini. At one time, the elephant-sized Megatherium was thought to be closely related, but is recognized as belonging to a separate family (Megatheriidae).
Recent molecular sequence results obtained using collagen and mitochondrial DNA extracted from fossils indicate that the closest living relatives of Mylodon are the two-toed sloths of genus Choloepus. This revelation came as a surprise, since morphological analyses had previously suggested that two-toed sloths were close to Caribbean sloths and Megalonyx, now regarded as representing two separate and distant branches of the sloth evolutionary tree.
Mylodon weighed about 1,000 kilograms and was about 3 m long from snout to tail tip. It had very thick hide and had osteoderms within its skin for added armor. Because of this armor and its long and sharp claws, it is unlikely that the Mylodon had any natural enemies other than humans, who would have still found the skin difficult to pierce with stone projectile points.
At several sites preserved hide and dung have been discovered, and are in such a state of conservation that the people who first discovered them believed they belonged to a living animal instead of an extinct species. Mylodon was named by Richard Owen on the basis of a nearly complete lower jaw with teeth, which was found by Charles Darwin in a consolidated gravel cliff at Bahía Blanca, during the survey expedition of HMS Beagle.
Well preserved samples of Mylodon remains have been discovered in the Cueva del Milodón site in Patagonia, Chile along the southern flank of Cerro Benítez in the year 1896. Associated with bones of other early Patagonian animals, these remains of Mylodon date from an era earlier than 10,000 BC. The American Museum of Natural History has exhibited a sample of Mylodon dung from Argentina with a note that reads "deposited by Theodore Roosevelt".
The discovery of fresh looking samples of skin and dung sparked a small wave of expeditions during the early 20th century to search for a living example of the animal. The samples have since been found to be around 10,000 years old, although they look fresh because of the extreme cold and stable conditions in the caves in which they were found.
Fossils assigned to Mylodon have also been found in the Ñuapua Formation of Bolivia.
Tags:
omnivorous, herbivorous, sloths, mylodon, Pilosa, pleistocene, holocene, South America, Xenarthrans
Related images