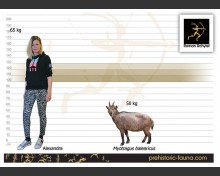 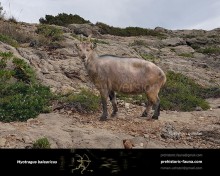 Balearic Islands cave goat (Myotragus balearicus (Bate, 1909))
Order: Artiodactyla
Family: Bovidae
Subfamily: Caprinae
Dimensions: height - 50 сm, weight - 40-70 kg
Temporal range:  Pliocene–Holocene 5.3–0.005 Ma  (the islands of Majorca and Menorca)
The Balearic Islands cave goat, was a species of the subfamily Caprinae which lived on the islands of Majorca and Menorca until its extinction around 5,000 years ago.The fossil record of Myotragus on the Balearic Islands extends over 5 million years back to the early Pliocene on Majorca, where it presumably arrived after the Messinian Salinity Crisis, represented by a sequence of chronospecies ancestral to M. balearicus. M. balericus is noted for a number of unusual morphological adaptions, including forward facing eyes suggestive of binocular vision. Early genetic research suggested that it was closely related to Ovis, however more recent research has indicated that it is most closely related to the takin.
Its eyes were not directed towards the sides, as are those of nearly all the herbivorous mammals, but towards the front like nearly all primates and carnivorans, granting them stereoscopic vision. The lower jaw contained two perennial-growth incisors, like rodents and lagomorphs, but not other ungulates. The lower jaw usually lacked other incisors, though some jaws have been found with vestigial second incisors. The upper jaw lacked incisors. The rest of its teeth were molars and premolars adapted to the crushing of vegetal matter. The nose was short in comparison with the rest of the skull, similar to the noses of rabbits and hares. Finally, both sexes had at the top of the head two very short horns. It is possible these horns were longer, having short bone-bases and long horn-covers, but no complete horns have been found.
Myotragus balearicus was quite small in size, standing about 50 cm at the shoulder and weighed between 50 and 70 kg. The legs were proportionately shorter than those of other related and less flexible bovids, which did not make Myotragus balearicus exceptionally fast. This was not a serious problem because on the islands there were no predators except for some birds of prey, from which they probably hid in the vegetation. On the shoulders they had a pronounced hump, while the back was bent in the hindquarters. The legs, like many from the order Artiodactyla, had four fingers of which only two were used to walk.
The bone histology of Myotragus shows lamellar-zonal tissue throughout the cortex, a feature otherwise typical of ectothermic reptiles. The growth of bones in Myotragus is unlike any other mammal and similar to crocodilians in showing slow and adaptive rates, intermittently ceasing growth altogether, and reaching somatic maturity by about 12 years. This pattern of growth indicates that Myotragus, in the same way as extant reptiles, adapted its metabolism to changing food and water availability, and ambient temperatures.
Tags:
Bovidae, myotragus, Europe, ungulate, herbivorous, pliocene, Caprinae, holocene, pleistocene, Majorca, Menorca
Related images