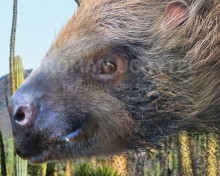 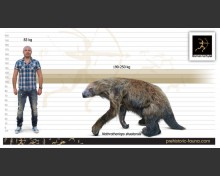 Temporal range: during the Pleistocene of North America (2.6–0.011 Ma)

Nothrotheriops is a genus of Pleistocene ground sloth found in North America, from what is now central Mexico to the southern United States. This genus of bear-sized xenarthran was related to the much larger, and far more famous Megatherium, although it has recently been placed in a different family, Nothrotheriidae. The most well known species, N. shastensis, is also called the Shasta ground sloth. Although N. shastensis was one of the smallest ground sloth species, it still reached 2.75 metres from snout to tail tip and weighed 250 kilograms  (one-quarter of a tonne) - much smaller than some of its contemporary species such as the Eremotherium, which could easily weigh over two tonnes and be 6 metres long. It had large, stout hindlegs and a powerful, muscular tail that it used to form a supporting tripod whenever it shifted from a quadrupedal stance to a bipedal one (i.e. Eremotherium).

Nothrotheriops behaved like all typical ground sloths of North and South America, feeding on various plants like the desert globemallow, cacti, and yucca. It was hunted by various local predators, like dire wolves and Smilodon, from which the sloths may have defended themselves by standing upright on hindlegs and tail and swiping with their long foreclaws, like its distant relative Megatherium. The same claws could also been used as tools to reach past the plant spines and grab softer flowers and fruits. Also, the Shasta ground sloth may have had a prehensile tongue (like a giraffe) to strip leaves off branches.

The Shasta ground sloth is believed to have played an important role in the dispersal of Yucca brevifolia, or Joshua tree, seeds. Preserved dung belonging to the sloth has been found to contain Joshua tree leaves and seeds, confirming that they fed on the trees. It has been suggested that the lack of Shasta ground sloths helping to disperse the seeds to more favourable climates is causing the trees to suffer.

A fossil find had been described from as far north as the Canadian province of Alberta; however, this report is believed to have been mistaken. The genus lived primarily in the southwestern region of the U.S., from the states of Texas and Oklahoma to California; it has also been found in Florida. The best known historical specimen was found in a lava tube at Aden Crater in New Mexico; it was found with hair and tendon still preserved. Rampart Cave, in the Grand Canyon, Arizona, has a plentiful amount of the sloth's hair and dung, which allowed the scientists both to use radiocarbon dating techniques to establish when it lived. The most recent credible dates from this and each of about half a dozen other southwestern caves are about 11,000 BP (13,000 cal BP).