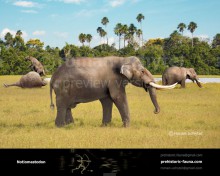 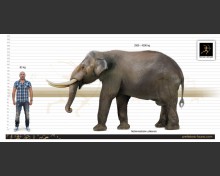 Stegomastodon (†Stegomastodon (Pohlig, 1912))
The South American species have been synonymized with Notiomastodon platensis.
Order: Proboscidea
Family: †Gomphotheriidae
Dimensions: length – 4,7 m, height – 2 -2,6 m, weight – 3500 -6000 kg
Temporal range: during the  Pliocene - Pleistocene epoch of North America (4~1.8 Ma )
Stegomastodon is an extinct genus of gomphotheres, a family of proboscideans. It ranged throughout North America.  The genus lived in North America from the Zanclean of the Pliocene to the Late Pleistocene. The most recent specimens in the fossil record originate from Jalisco, Mexico and date to 28,000 BP,  but this late date is over 1 million years after the last confirmed specimens.
A dispute now exists over whether S. platensis should remain within the North and Central American genus Stegomastodon or should be moved over to the exclusively South American genus Notiomastodon The genus Haplomastodon is regarded as synonymous with the South American Stegomastodon species.
Stegomastodon is considered by some to be derived from New World populations of Gomphotherium. The number of species within the genus has varied between S. mirificus being the only valid species, to Osborn's seven species of “ascending mutations” (S. primitivus, S. successor, S. mirificus, S. chapmani, S. texanus, S. arizonae and S. aftoniae) Lucas et al., 2013 accepted 3 overlapping chronospecies S. primitivus, S. mirificus S. aftoniae.

Stegomastodon mirificus is known from NMNH 10707, a roughly 30-year-old male, of which most of the skeleton has been found. Alive, it stood about 2.6 m  tall, with a weight around 5 tonnes. Like modern elephants, but unlike most of its closer relatives, it had just two tusks, which curved upward and were about 1.8 -3.5 m long. The tall, head and robust lower jaw suggest a strong vertical bite. Stegomastodon's molars were covered in enamel and had a complex pattern of ridges and knobbly protrusions on them, giving the creature a large chewing surface that suggests it was a grazer. During the early Irvingtonian, Stegomastodon was replaced by Mammuthus, which was presumably a more efficient grazer.

Notiomastodon is an extinct proboscidean genus of gomphotheres (a distant relative to modern elephants) endemic to South America from the Pleistocene to the Holocene living for about 1.8 million years. N. platensis is known from MECN 82, a 35-year-old male that would be around 2.52 m  tall, with an estimated weight of 4.4 tonnes. It had two tusks (one on either side of its trunk), like other members of the Gomphotheriidae. Unlike close relative Cuvieronius, its tusks were not twisted, but their length and shape are observed as greatly variable depending on the individual.

Notiomastodon belongs to the family Gomphotheriidae, a group of animals distantly related to modern elephants and mammoths. Notiomastodon seems to have had a 4-million-year-long ghost lineage, diverging from the clade that contains Rhynchotherium and Cuvieronius around the Late Miocene. This would imply that Notiomastodon had been evolving in southern Central America, where the fossils are poorly sampled, prior to its migration into South America during the Pliocene or Pleistocene.

Notiomastodon has been described as the 'lowland gomphothere'.The genus tended to inhabit seasonally dry, open forests, with a range lining most of the South American coastline and lowland interior, bar the Guiana Shield, with particularly large concentrations along the coast of Peru and in northeastern Brazil. In contrast, the other representative of South American gomphotheres, Cuvieronius, inhabited the mountainous Andes region from Ecuador to southern Peru and Bolivia, as well as lowland areas in north-east Peru.

The diet composition of Notiomastodon varied widely depending on location, but probably primarily consisted of a mix of C3 shrubs and C4 grasses, whilst also serving as a primary disperser of the seeds for a variety of different plant species.