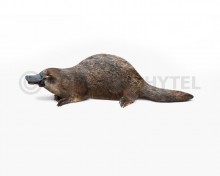 Obdurodon (Obdurodon Woodburne et Tedford, 1975)
Order: Monotremata
Family: Ornithorhynchidae
Dimensions: length - 91 cm, weight ~7 kg
Temporal range: Native to continental Australia (Late Oligocene-Late Miocene ~28–5 Ma)
Typical representative: †Obdurodon tharalkooschild (Pian et al., 2013)
Obdurodon is an extinct monotreme genus containing three species. Individuals of Obdurodon differed from modern platypuses in that adult individuals retained their molar teeth (in the modern platypus, individuals lose all of their teeth upon reaching adulthood). Compared to the modern platypus, which is a mostly benthic forager, Obdurodon foraged pelagically.
The description of a new genus and species of extinct ornithorhynchid, a family of the Monotremata, published in 1975 and noted as the earliest known evidence of the group in Australia. The authors, Michael O. Woodburne and Richard H. Tedford, described two specimens associated with the Lake Ngapakaldi to Lake Palankarinna Fossil Area. The discoveries were a result of joint ventures by US and Australian museums undertaking research in the remote central desert region of Australia.
The name of the genus is derived from Latin, obduros and don, a reference to the robustness, size and permanency of the molars as an "enduring tooth". When combined with the epithet of the type species, insignis, the name was intended to translate as "significant lasting tooth" for the importance of the find to the fossil record of the family. The genus is one of several to have been placed with the family Ornithorhynchidae, which is typified by the still extant species of platypus Ornithorhynchus anatinus and evidently more closely allied.
Obdurodon tharalkooschild is believed to have been carnivorous and estimated to be twice the size of the modern platypus at one metre long.
Obdurodon tharalkooschild is thought to have inhabited fresh water and hunted for a variety of animal prey in the forests that dominated the Riversleigh site at the time of deposition. The species diet is assumed to have included crustacea like those consumed by the modern platypus, although larger species were available due to its greater size. The potential prey of the Riversleigh fauna also included frog, turtle, fish and the lungfish, species that are present in the deposition at the Two Tree Site of the Riversleigh formations. The ornithorhynchid species were unknown in the later fossil record at the time of discovery, and it defied the assumptions of a single lineage of a platypus-like animal that progressively lost its teeth and became smaller in size.
Tags:
endemic, Miocene, platypus, oligocene, Australia, monotremata, obdurodon, semiaquatic egg-laying mammals, ornithorhynchidae, megafauna
Related images