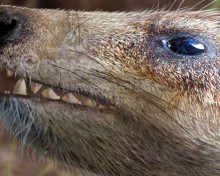 Ocepeia (Ocepeia daouiensis (Gheerbrant & Sudre, 2001))
Clade: Paenungulata (?)
Order: incertae sedis
Family: †Ocepeiidae
Time period: It lived during the Paleocene (Africa, 61–57 Ma)
Size: 30-70 cm long, weight estimated at up to‭ 12‭ ‬kg.
A typical representative: O. daouiensis
Ocepeia is an extinct genus of afrotherian mammal that lived in present-day Morocco during the middle Paleocene epoch, approximately 60 million years ago, and are believed to have been specialized leaf-eaters. This animal lived at a time when northwest Africa was at the intersection of the Atlantic Ocean and the ancient Tethys Ocean, and much of the area was flooded by shallow, warm inland seas. The fossil skulls of Ocepeia are the oldest known afrotherian skulls, and the best-known of any Paleocene mammal in Africa.
Loosely grouped with the archaic ungulates known as "condylarths", Ocepeia shares several features with primitive paenungulates (a group including elephants, hyraxes, and extinct relatives), but some analyses suggest it is more closely related to Afroinsectiphilia (a group containing aardvarks, golden moles, and tenrecs). As such, it may represent a transitional stage in the evolution of paenungulates from insectivore-like mammals. Unusual features of Ocepeia include skull bones with many air-spaces, and teeth and jaws reminiscent of those of simian primates. Ocepeia also has fewer teeth than other early ungulates. Ocepeia is distinct enough from other groups that it is placed in its own family, Ocepeiidae.
The early appearance and specialized features of Ocepeia suggest afrotherians originated and diversified within Africa, contrary to theories suggesting a more northern origin.
First named and described in 2001, the type species is O. daouiensis from the Selandian stage of Morocco's Ouled Abdoun Basin. A second, larger species, O. grandis, is known from the Thanetian, a slightly younger stage in the same area. Estimates of body weight of O. daouiensis range between 8.5 kg, estimated from tooth length, and 2.5 kg, estimated from skull length. Using average values for all ungulates, Gheerbrant et al. found the most likely estimate was 3.5 kg. The dental remains of O. grandis are about 1.5 times larger than O. daouiensis, giving an estimated weight of 10–12 kg.
Tags:
Paleocene, paenungulates, Africa, Afrotheria, ocepeia, Afroinsectiphilia, Paenungulata
Related images

Evolution of the Paenungulata, poster
$0.00