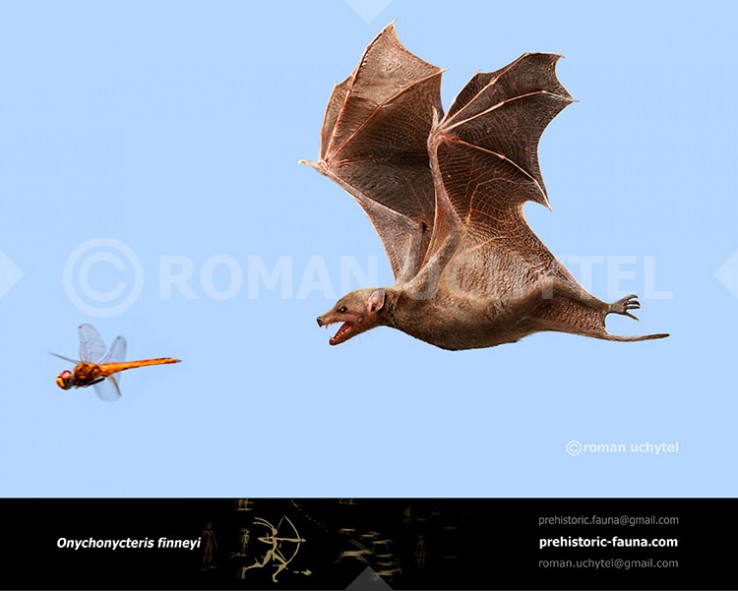 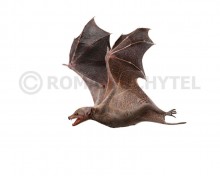 Onychonycteris (†Onychonycteris finneyi (Simmons, Seymour, Habersetzer, and Gunnell 2008))
Order: Chiroptera
Family: †Onychonycteridae
Dimensions: length - 25 cm, weight - 170-400 g
Temporal range: Eocene of North America (52.5 million years ago)
A typical representative: †Onychonycteris finneyi
Onychonycteris is the more primitive of the two oldest known monospecific genera of bat,  was unique among bats in that it had claws on all five fingers, as opposed to two or three in all other known species.Its limb proportions represent an intermediate between bats and non-flying mammals, with longer hind-limbs and proportionally shorter wings. The aerofoil of this bat lacks any aerodynamic equivalent among known bats, and this aerofoil likely contributed to an undulating flight style that alternated fluttering and gliding. This flight style may represent both a functional and evolutionary intermediate between gliding and powered flight.
Onychonycteris finneyi was the strongest evidence so far in the debate on whether bats developed echolocation before or after they evolved the ability to fly. O. finneyi had well-developed wings, and could clearly fly, but lacked the enlarged cochlea of all extant echolocating bats, closely resembling the old world fruit bats which do not echolocate. This indicates that early bats could fly before they could echolocate.
However, an independent evaluation of the Onychonycteris reference fossil in 2010 provided some evidence for other bone structures indicative of laryngeal echolocation, raising the possibility that Onychonycteris finneyi possessed the ability to echolocate after all. They did acknowledge that the fossil itself has been flattened by the fossilization process, and thus it was difficult to ascertain the exact bone structure and configuration, a fact that still casts a degree of uncertainty on the results of both studies.
It is unknown whether Onychonycteris had the large eyes of most nocturnal animals as specimens with intact eye sockets have yet to be found. A lack of enlarged eyes would indicate that this species may have been diurnal, solving the problem of how primitive bats evolved flight without the ability to navigate at night using echolocation.
Onychonycteris occurs alongside Icaronycteris index, previously thought to be the most primitive known bat species.
Tags:
Onychonycteridae, North America, onychonycteris, bat, eocene, Chiroptera
Related images