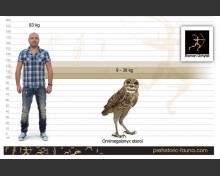 Temporal range: the Late Pleistocene period on the island of Cuba(10,000s of years ago)

The Cuban giant owl or giant cursorial owl is an extinct genus of giant owl that measured 1.1 metres in height. It is closely related to the many species of living owls of the genus Strix. It was a flightless or nearly flightless bird and it is believed to be the largest owl that ever existed. It lived on the island of Cuba.

The first fossil specimen was mistakenly described as a bird in the family Phorusrhacidae, in part because the bones were so large. In 1961, Pierce Brodkorb reviewed the findings and placed them properly, with the owls. Remains have been abundant throughout the island, in cave deposits from the Late Pleistocene period (10,000s of years ago) and at least three nearly complete skeletons have been found.

Arredondo estimated the height of Ornimegalonyx to have been 1.1 metres tall and it probably easily exceeded 9 kilograms. It had very long legs for its size, but was bulky overall and probably short-tailed. The modern owl that most resembles the Cuban giant owl in proportions is probably the dainty burrowing owl, the only surviving owl closely tied to the ground. This implies similar adaptations to the terrestrial lifestyle, but not a close phylogenetic relationship.

One of the largest living owl, the Eurasian eagle owl (Bubo bubo), reaches 4 kg in weight, and Peters (page 188) has reported them taking roe deer fawns that weigh 17 kg as prey. This suggests that Ornimegalonyx could have killed prey of 35 kg or more. Modern owls are known to use a pouncing strategy - where they drop from elevated perches onto prey, spreading their wings only just before hitting their target. The modern kakapo (Strigops habroptila) is a flightless island parrot and is convergent, in some ways, with owls. Like Ornimegalonyx, it is the largest and heaviest member of its order, it has reduced wings, and a reduced keel of the sternum, but it can parachute by leaping from trees with its wings outspread, potentially covering several meters at an angle of descent less than 45 degrees.

The legs and feet of the Cuban giant owl appear to be very large and powerfully built. This supports the theory that they were strong runners, hence the alternate name, cursorial. The keel of the sternum was reduced and the owl may have been capable of short burst of flight. It is probable that, like a modern wild turkey, the owl only took flight when extremely pressed, more often choosing to run.

The Cuban giant owl is believed to have preyed principally on large rodents including Heteropsomys, Capromys, Geocapromys, and Macrocapromys (the size of modern nutria or capybara) and the ground sloths Cubanocnus, Miocnus, Mesocnus, and Megalocnus. It was probably an ambush predator that would pounce on unsuspecting prey with its crushing talons.