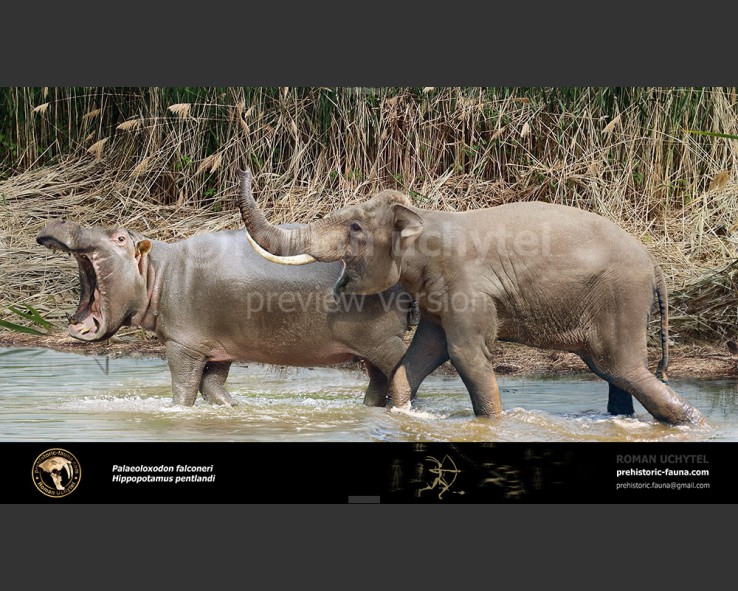 Sicilian dwarf elephant (†Palaeoloxodon falconeri (Busk, 1867))
Siculo-Maltese species
Order: Proboscidea
Family: Elephantidae
Genus: †Palaeoloxodon
Dimensions: length - 2,2 m (with tusks), height -  80 -100 cm, weight - 160 - 300 kg
Temporal range: during the Late Pleistocene to Holocene (the island of Sicily).
Palaeoloxodon falconeri, also known as the Sicilian dwarf elephant , is an extinct Siculo-Maltese species of elephant that was derived from the straight-tusked elephant.
This island-bound elephant was an example of insular dwarfism, with an adult male specimen measured 96.5 cm in shoulder height and weighed about 305 kg, and an adult female specimen measured 80 cm in shoulder height and weighed about 168 kg. P. falconeri's ancestors most likely reached the Mediterranean islands during a period of Pleistocene maximum when the sea levels were around 100 m lower, that significantly reduced distances and opened land bridges in between islands and from and to the mainland.
The belief in cyclopes may have originated in P. falconeri skulls found in Sicily. As early as the 14th century, scholars had noted that the nasal cavity could be mistaken for a singular giant eye socket.
Sicilian dwarf hippopotamus (†Hippopotamus pentlandi (Von Meyer, 1832))
Order: Artiodactyla
Family: Hippopotamidae
Time period: during the Pleistocene (Sicily)
Size: 180 cm in length, 130 cm in height, 320 kg of weight
Hippopotamus pentlandi is an extinct hippopotamus from Sicily. It arrived during the Pleistocene, in the Messinian salinity crisis. It is the largest of the insular dwarf hippos known from the Pleistocene of the Mediterranean, weighing in at 320 kg.
Tags:
herbivorous, Pleistocene, Holocene, sicilian dwarf elephant, palaeoloxodon, proboscidea, elephantidae, Europe
Related images