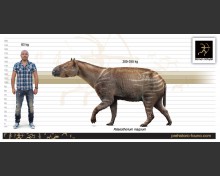 Palaeotherium (†Palaeotherium (Cuvier, 1804))
Order: Perissodactyla
Family: †Palaeotheriidae
Temporal range: Early to Middle Eocene (Europe)
Dimensions: 130 - 270 cm in length, 75-145 cm in height, 20 - 350 kg of weight
Palaeotherium was a relatively large herbivore for Late Eocene Europe. Elongated neck (especially evident in P. magnum), and high crowned teeth suggest Palaeotherium is likely to have been a browser, with a diet of soft fruit and leaves taken from low hanging vegetation and ground level. The largest species P. magnum may have been capable of browsing at heights of up to 2m. These browsing adaptions indicate Palaeotherium may have had a preference for wooded or at least semi-wooded habitats.
Palaeotherium became extinct during the Grande Coupure c.33.6 million years ago, an important faunal turnover event in the early Oligocene that saw the extinction of many of the mammal groups that typify Late Eocene Europe.
Post-cranially Palaeotherium was relatively robust with long legs and three-toed fore and hindfeet. The forelimbs were proportionally longer than the hindlimbs. Elongated but robust tarsal and carpal bones indicate a cursorial locomotion for the genus. The cervical vertebra are also elongate, and particularly so in P. magnum, giving Palaeotherium a relatively long neck.
Palaeotherium possessed a skull with a vaguely similar shape to that of a horse, although the skull was much shorter with the orbits in a more anterior position. This is partly due to the greater development of the temporal muscles, which required longer temporal pits.
Georges Cuvier originally described Palaeotherium as a kind of tapir, and as such, Palaeotherium was popularly reconstructed as a tapir-like animal. 19th and 20th century reconstructions, most famously those at Crystal Palace Park, depicted Palaeotherium with a short trunk like that seen in Tapirs. Reconstructions of this nature are now considered erroneous with Palaeotherium exhibiting a suite of distinct skeletal characteristics to Tapirs, such as more elongated legs, relatively long upright necks, and longer forelimbs than hindlimbs. Furthermore although the nasal bones are set back, there is no specialization of the nasal area for proboscis like that observed in tapirs. A closer post-cranial would be the Okapi.
Tags:
herbivore, palaeotherium, tapirus, eocene, perissodactyla, Europe, odd-toed ungulate
Related images