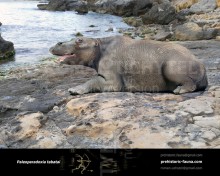 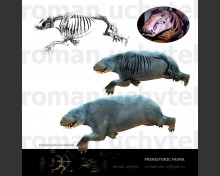 Paleoparadoxia ("ancient paradox") is a genus of large, herbivorous aquatic mammals that inhabited the northern Pacific coastal region during the Miocene epoch (20 to 10 million years ago). It ranged from the waters of Japan (Tsuyama and Yanagawa), to Alaska in the north, and down to Baja California, Mexico. Paleoparadoxia was about 2.2 m  long.

Paleoparadoxia is thought to have fed primarily on seaweeds and sea grasses. The jaws and the angle of the teeth resemble a backhoe bucket. Its bulky body was well adapted for swimming and underwater foraging, but not for extended deep-sea living or deep diving. Originally interpreted as amphibious, Paleoparadoxia is now thought to have been a fully marine mammal like their living relatives, the sirenians, spending most of their lives walking across the sea bottom like marine hippos.

Tokunaga 1939 named the genus Cornwallius but Reinhart 1959 synonymized it as a species of Paleoparadoxia.