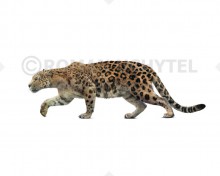 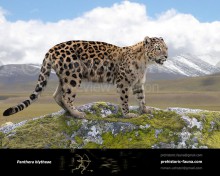 Panthera blytheae is an extinct species of the Panthera genus that is believed to have existed approximately 4.1-5.95 million years ago, during the late Messinian to early Zanclean ages. It is currently the oldest known species in the Panthera genus. The first fossil of Panthera blytheae was in 2010 by Jack Tseng et al. of the American Museum of Natural History, in the Zanda Basin, located in the Tibetan Plateau.

Currently, only a fossil of a Panthera blytheae cranium has been found. However, current evidence shows that the species has a number of features common in other Panthera species, including a "frontoparietal suture located at the postorbital constriction", and an "absence of an anterior bulge overhanging the infraorbital canal".

Its size is believed to be on par with that of the clouded leopard, and is about 10% smaller than the snow leopard. However, this is purely based on the relative sizes of the cranium, so this may be slightly inaccurate.

Panthera blytheae is not believed to be as closely related to the other extant species of the Panthera genus, and is therefore not believed to be the common ancestor of all pantherines. This implies that the divergence of the Panthera genus from the rest of Felidae was much earlier, with current estimates being approximately 16.4 million years ago. Analysis of the location of Panthera blytheae, as well as that of other Panthera species, indicates that the Panthera genus diverged from Felidae in Central/Northern Asia or the Holarctic region of Asia, with other pantherines migrating to Europe, Africa and the Americas.