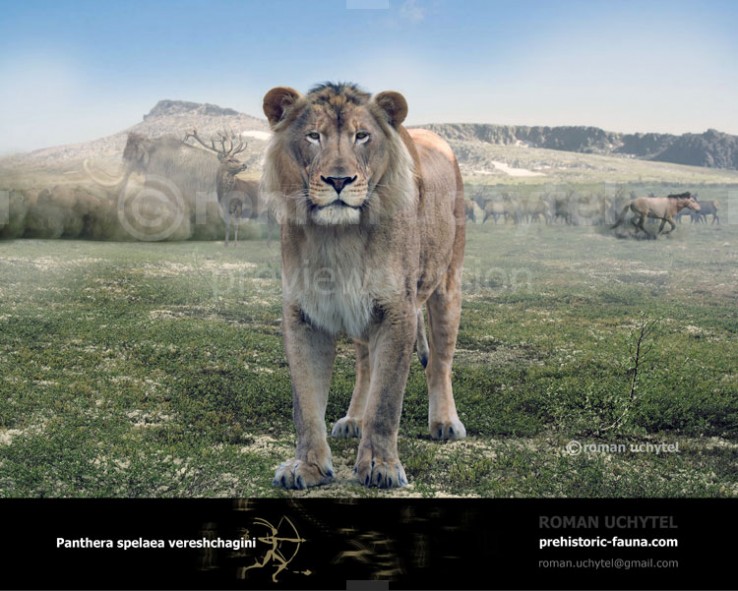 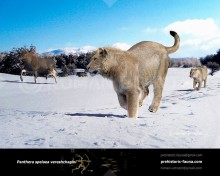 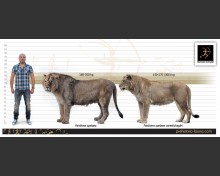 Range and period of existence: Late Pleistocene of North-East Asia and North America (320-12 thousand years ago)


Based on the study of cave lions in Eastern Europe and Northern Asia, this form was assigned the subspecies status Panthera spelaea vereshchagini. Panthera spelaea vereshchagini, also known as the East Siberian and Beringian cave lion, lived in the late Pleistocene in Yakutia (Russia), Alaska (USA) and the Yukon (Canada). The analysis of skulls and jaws of this lion shows that Beringian form differs from other Phantera spelea by the smaller size and proportions of the skull (approximately 20% smaller). Recent genetic studies also confirm some of their differences from the Eurasian and North American lions. The identification of modern and extinct lions is complicated by the presence of common features, although characteristics such as body size or differences in the shape of skull and dental features were used for proposed taxonomic distinction between today’s lions (Panthera leo) and Pleistocene lions (Panthera spelaea). The status of these groups as separate species or subspecies, and their relationship to each other remain controversial, but most analyses suggest that these groups separated about 750,000 years ago into the well-isolated clusters of modern, American and cave lions. Besides, the late-quaternary history of P. leo is very different from the evolution of P. spelaea. Currently, the Late Pleistocene lion of Beringia is presented as a homogeneous population that ranged from eastern Siberia to Alaska and western Canada, and possibly was a utmost form of Panthera spelaea. In early studies, the Beringian large cat is mentioned as P. atrox, but the study of metric characteristics of the Beringian lion proved that it was more closely related to Eurasian populations. Beringia was the subcontinent that connected North America and Eurasia during the Pleistocene glaciations, covering eastern Siberia and the Kamchatka Peninsula, an isolated area of ​Alaska, the Yukon and the Northwestern Territories, as well as the space flooded nowadays by Bering-Chukotski platform. The skeletal remains of the Beringian cave lion were found together with the fossils of typical Ice Age fauna - mammoths, bison, horses, donkeys, northern and red deer, saiga antelopes, bears and wolves. The relatively large size of the Beringia cave lion suggests that it may have hunted large prey, including horses, reindeer, musk oxen, and the now-extinct steppe bison.

Add to Cart
Reviews (39)
Write a review:
Your Name: