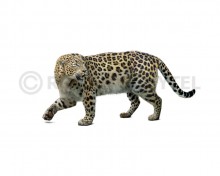 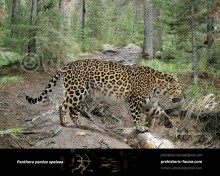 Late Pleistocene Ice Age leopard (†Panthera pardus spelaea (Bächler, 1936))
Order: Carnivora
Family: Felidae
Time period: late Pleistocene of Europe (600,000 to 2,000 years ago)
Size: 2 - 2.6 m in length, 70-85 cm in height, 50-120+ kg of weight.
European Cave leopard or European Ice Age leopard, is a fossil leopard subspecies, which roamed Europe in the Late Pleistocene. Are similar in size to largest modern leopard.
The European Ice Age leopard is thought to have resembled a snow leopard or Persian leopard in fur pattern. Its skull was medium-long and its characteristics are closest to modern Persian leopards. The only known depiction of this leopard in the Chauvet Cave shows a coat pattern similar to that of modern leopards. It is unclear if the spots were organised in larger rosettes like in modern Persian leopards. In contrast to modern leopards, the belly of the depicted animal is unspotted white. Leopards from the cold phases (glacials) of the Late Pleistocene are usually larger than those from the warm phases (interglacials).
The earliest known European Ice Age leopard fossils are dated to the late Early Pleistocene and estimated about 600,000 years old. They were excavated in the Grotte du Vallonnet in France and near Mauer in Germany. The most complete skeleton of a spelaea leopard is known from Vjetrenica Cave in southern Bosnia and Herzegovina, where four leopard fossils were found. These are dated to the end of the Late Pleistocene, about 29,000–37,000 years ago. Cave paintings of spelaea leopards in the Chauvet Cave in southern France are dated to about 25,000–37,500 years old. The last European Ice Age leopards vanished from most parts of Europe about 24,000 years ago, just before the Last Glacial Maximum, because the youngest known fossil is 24,000 years old and was found in Croatia. In Germany, the European Ice Age leopard survived at least into the early Weichselian glaciation.
Subfossil leopard remains dated to the Holocene were excavated in Spain, Italy, and the Ponto-Mediterranean and Balkan regions. The youngest subfossil leopard records in Europe were excavated in Ukraine and dated to the first century CE.
Some subfossils were found in western Greece, close to the Carpathians; others were found in Olbia, Ukraine at the northern coast of the Black Sea. The latter might belong to captive leopards, which could have been introduced from Asia Minor, since Olbia was a Greek colony at this time.
Fossils of European Ice Age leopards in Europe are sometimes found in caves, where they apparently sought shelter or hid their prey. They generally preferred smaller caves, most likely because larger caves were usually occupied by larger predators such as cave bears, cave lions (P. spelaea), or humans. In European Ice Age caves, leopard bones are far rarer than those of lions, and all currently known fossils belong to adults, suggesting that they rarely, if ever, raised their cubs in caves. Where leopard remains are found in larger caves, they are often found in the cave's deeper recesses, as in Baumann's and Zoolithen Cave in Germany. It is not precisely known which prey species these leopards hunted, although they may have been similar to modern snow leopards, which prey on ibex, deer and wild boar. It is likely that leopards scavenged or occasionally killed cave bears during hibernation in their dens. During the cold phases, European Ice Age leopards occurred mainly in mountain or alpine boreal forests or in mountains above the treeline, and were not usually found in the lowland mammoth steppes.
Tags:
caveleopard, panthera pardus, carnivore, ice age, predators, cats, pleistocene leopard, megafauna, felidae, Europe
Related images