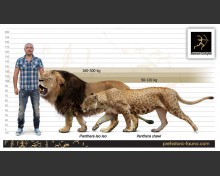 The first finds the lions in Africa date back to about 3.5 million years ago - Laetoli (Tanzania). Although Turner (1990) attributed them to the lions, but other authors are defined these residues as a Panthera sp., with attributive features of lions and other cats, morphologically similar to jaguars. Other finds from the Late Pliocene and having more explicit signs of belonging to the lion line defined as Panthera shawi. Sagittal crest is high; mandible in a general form similar to some samples Panthera fossilis of Mosbach. There are also differences in the structure of the molars. Some scientists believed that this basal form is a leopard's ancestor that is likely very doubtful, as P. pardus findings at that time were already clearly stated. In fact, all the bone material attributable to P. shawi is pretty meager - mostly fragments maxillary molars with varying degrees of preservation, some cutters and postcranial bones. Essentially, all that can be said about this cat - it was a pantherine in size similar to a small lion. Indeed, the available material is more like the remains of a lion, but it is not sufficient for the diagnosis at the species level. Although between the Late Pliocene-Early Pleistocene specimens and subsequent finds is a large chronological break at the moment, so taxonomic status, in fact, should be revised. However, the validity of Panthera shawi, because of the fragmentation of the material is still not universally accepted.

Further sequence of the Pantherinae's evolutionary lineage leading to descendants basal Pliocene forms dating from the end of the Early Pleistocene (1.8 - 1.3 million years ago) - from this time the story of lions on the African continent can be traced geographically more or less clearly. And it is significant that from the beginning the story of lions is well correlated with climatic shifts of the northern hemisphere, which entered into a phase of glacial cycles. tarting spread savannah landscapes dated to 2.7-2.5 million years ago, is well supported by palynological, lithostratigraphic and other indicers. That's why this is mostly an archaic form of ancestor Pleistocene Leo- actually P. leo and the line leading to the emergence of Panthera spelaea.