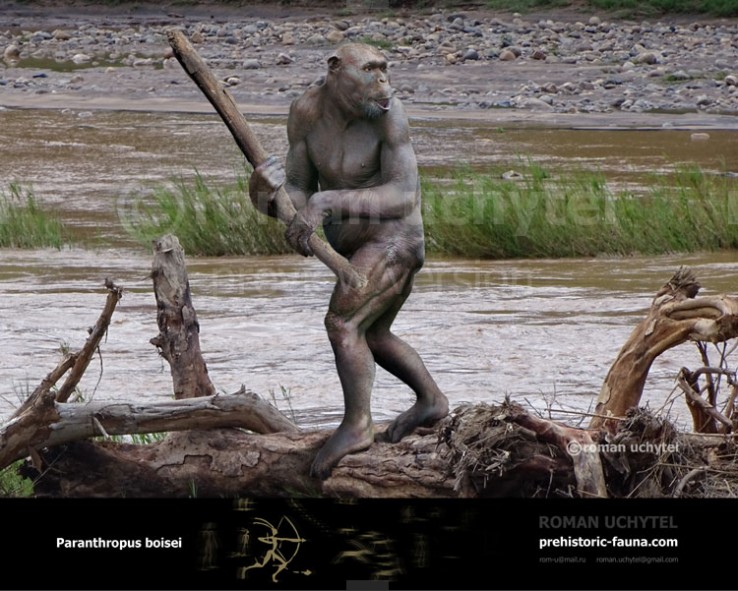 Temporal range: Eastern Africa during the Pleistocene epoch from about 2.4 until about 1.4 million years ago.

Paranthropus boisei or Australopithecus boisei was an early hominin, described as the largest of the Paranthropus genus (robust australopithecines). The brain volume is quite small, about 500 to 550 cm³, not much larger than Australopithecus afarensis and Australopithecus africanus or modern-day chimpanzees. In P. boisei the foramen magnum is much shorter than in P. robustus. In, addition, the cranial variation of P. boisei is remarkably high. The adult males were larger on average than females (sexual dimorphism), as was the case in virtually all australopithecine species. Males weighed some 49 kg  and stood about 1.37 m tall, while females weighed about 34 kg  and were 1.24 m in tall.

It had a skull highly specialized for heavy chewing and several traits seen in modern-day gorillas. The molar teeth were very large, with an area over twice that of modern humans. The species is sometimes referred to as “Nutcracker Man” because it had the biggest, flattest cheek teeth and the thickest enamel of any known hominin. P. boisei had large chewing muscles attached to a pronounced sagittal crest. To accommodate their enormous cheek teeth (four times the size of modern human teeth, P. boisei had a wide face, although the front teeth were much smaller than in similar species.

Some argue that the craniodental morphology of this taxon (e.g. large postcanine dentition, thick enamel, robust mandibles, sagittal cresting, flaring zygomatic region) is indicative of a diet of hard or tough foods such as ground tubers, nuts and seeds. However, research on the molar microwear of P. boisei  has found a pattern very different from that observed in P. robustus in South Africa, which is thought to have fed on hard foods as a fallback resource. This work suggests that hard foods were an infrequent part of P. boisei's diet. Carbon isotope ratios suggest P. boisei had a diet dominated by C4 vegetation, unlike P. robustus in South Africa.