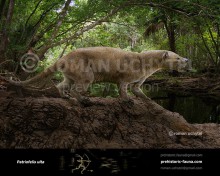 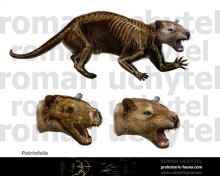 In North America during the Miocene, some 45 million years ago, the cat-like creodont Patriofelis hunted in the conifer forests.  About the size of a modern-day jaguar, Patriofelis had short legs, a long tail, and broad paws.  The paws suggest that the creodont may not have run fast, but could have been a good swimmer.  Modern jaguars often hunt in the rivers.  At the very least, Patriofelis was probably an ambush hunter.
Game in Nevada and Oregon was plentiful.  Small horses started to travel in herds, taking advantage of the receding forests.   Could Patriofelis lay in wait near watering holes, picking off unwary prehistoric horses and other herbivores.
One theory about Patriofelis' habits suggest that it led a semi-aquatic life.  A specimen found in the Bridger Lake sediment had very well-worn teeth.  Bridger Lake once swarmed with turtles.  If so, the turtles may have been a staple part of Patriofelis' diet!  To support this theory, coprolites containing fragments of turtle shells have been found in the Bridger Lake sediment.  Patriofelis definitely had jaws robust enough to dine on turtles.
Patriofelis' predecessor Oxyaena, was a good climber but it looks like Patriofelis preferred the water to the trees.  If Patriofelis continued in the water, it may have evolved into modern pinnipeds.  So, the "father of cats" may actually have been more like the "father of seals!" The largest Patriofelis - Patriofelis ferox - was about the size of a small black bear, with a disproportionately large skull.  The skull is also broad and short and have some aspects similar to that of a sea lion's skull.  However, unlike a sea lion, Patriofelis had a small brain case inside its huge, thick skull.  Patriofelis ulta was about a third smaller.  Both species had broad, plantigrade feet and long bodies and tails.  Some of the sketches of Patriofelis resemble an otter on steroids more than a feline.