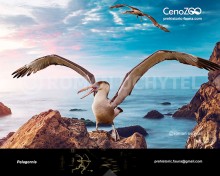 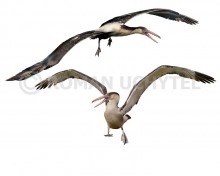 Pelagornis (†Pelagornis (Lartet, 1857))
Class: Aves
Order: †Odontopterygiformes
Family: †Pelagornithidae
Time period: Late Oligocene–Early Pleistocene (25–2.5 Ma, Europe, Africa, North and South America, New Zealand)
Size: more than 140 cm in height, wingspan was probably more than 5 m, ~30 kg of weight
Pelagornis is a widespread genus of prehistoric pseudotooth birds. These were probably rather close relatives of either pelicans and storks, or of waterfowl, and are here placed in the order Odontopterygiformes to account for this uncertainty.
The fossil specimens show that P. miocaenus was one of the larger pseudotooth birds, its head must have been about 40 cm long in life, and its wingspan was probably more than 5 m. Unlike in its contemporary Osteodontornis but like in the older Pseudodontornis, between each two of Pelagornis's large "teeth" was a single smaller one.
Four species have been formally described, but several other named taxa of pseudotooth birds might belong in Pelagornis too. The type species Pelagornis miocaenus is known from Early Miocene sediments – formerly believed to be of Middle Miocene age – of Armagnac (France). The original specimen on which P. miocaenus was founded was a left humerus almost the size of a human arm.  Like many pseudotooth birds, it was initially believed to be related to the albatrosses in the tube-nosed seabirds (Procellariiformes), but subsequently placed in the Pelecaniformes where it was either placed in the cormorant and gannet suborder (Sulae) or united with other pseudotooth birds in a suborder Odontopterygia.
While P. miocaenus was the first pseudotooth bird species to be described scientifically, its congener Pelagornis mauretanicus was only named in 2008. It was a slightly distinct and markedly younger species. Its remains have been found in 2.5 Ma Gelasian (Late Pliocene/Early Pleistocene, MN17) deposits at Ahl al Oughlam (Morocco).
Additional fossils are placed in Pelagornis, usually without assignment to species, mainly due to their large size and Miocene age. From the United States, such specimens have been found in the Middle Miocene Calvert Formation of Maryland and Virginia, and in the contemporary Pungo River Formation of the Lee Creek Mine in North Carolina.  It is not clear whether the South American fossils – of similar size and age and not including directly comparable bones – are from one or two species. Given the distance in space and time involved, all Pacific material may well have been a species different from P. miocaenus or even from birds closer to Osteodontornis.
A new species of Pelagornis was described in July 2014, Pelagornis sandersi. It is believed to have had a wingspan of at least 6.4 m, making it the largest flying bird ever.
Tags:
neogene, pelagornis, prehistoric, pseudotooth birds, Odontopterygiformes
Related images