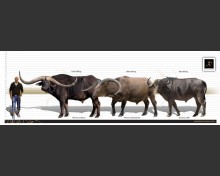 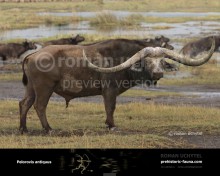 Time period: which first appeared in the Pliocene, 2.5 million years ago, and became extinct at the Late Pleistocene about 12,000 years ago or even during the Holocene, some 4,000 years ago.

Pelorovis is an extinct genus of African wild cattle, which first appeared in the Pliocene, 2.5 million years ago, and became extinct at the end of the Late Pleistocene about 12,000 years ago or even during the Holocene, some 4,000 years ago.  In contrast, the late Pleistocene form (Pelorovis antiquus) seems to be a close relative of the modern African buffalo (Syncerus caffer)

Pelorovis resembled an African buffalo, although it was larger and possessed longer, curved horns. Pelorovis probably weighed about 1,200 kilograms, with the largest males attaining 2,000 kilograms. This rank it as one of the largest bovines that ever lived, rivaling the American long-horned bison Bison latifrons. The bony cores of the horns were each about 1 metre  long; when covered with keratin (which does not survive fossilisation) they could have been up to twice this length. The horns pointed away from the head, each forming a half circle in the species Pelorovis oldowayensis and Pelorovis turkanensis. Pelorovis oldowayensis was broadly the same size as modern African buffalo, but its legs were longer, and the elongated head of this species was reminiscent to those of the modern Alcelaphinae. Pelorovis antiquus was about the same size, but it was more robust.

Pelorovis antiquus disappeared around 12,000 years ago from southern and eastern Africa. Fossil and archaeological evidence indicates, that this species lived in North Africa until 4,000 years ago. Pelorovis oldowaywensis occurred in sub-Saharan Africa and disappeared 800,000 years ago.