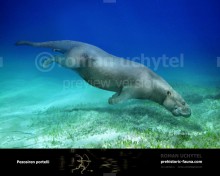 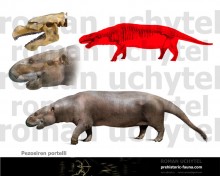 Temporal range: during the early Eocene of Jamaica (50 million years ago).

Pezosiren portelli is a basal sirenian from the early Eocene of Jamaica, 50 million years ago. The type specimen is represented by a Jamaican fossil skeleton, described in 2001 by Daryl Domning, a marine mammal paleontologist at Howard University in Washington, DC. It is believed to have a hippopotamus-like amphibious lifestyle, and is a perfect example of a transitional form between a land mammal and a sea mammal.

P. portelli had the typical skull and basic body shape shared by most modern sirenians, like manatees and dugongs, but also had four limbs, not yet modified into flippers, with well-developed feet and hands, that were still adapted for walking on land.

In the 1990s, vertebrate fossils were found in lagoon deposits at Seven Rivers in Jamaica by Daryl Domning and colleagues. The site is rich in fossils, and yielded hundreds of bones of mainly aquatic vertebrates, a primitive rhinoceros, and possibly a primate. In 2001 Domning described a walking sirenian from this site as Pezosiren portelli, based on a nearly complete skeleton. It is the first known quadrupedal sirenian, and is considered a transitional form between land and sea sirenians. Pezosiren had four limbs perfectly adapted to walking instead of flippers but at the same time the typical skull, teeth and ribs of the fully aquatic, ‘normal’ sirenians. Its heavy ribs, providing ballast, indicate that it was semi-aquatic, perhaps like a hippo. The Seven Rivers site is not only one of the very rare examples of a non-cave deposit in the West Indies, but also the oldest discovered so far, with an age of late Early or early Middle Eocene. The formation was attributed to the late Early or early Middle Eocene by Robinson in 1988. The presence of this land mammal in Jamaica can be explained as evidence of an Eocene land bridge connecting North America, the Mexican Arc, the Chortis Block, the Nicaragua Rise and Jamaica. Whatever might be the origin of this sirenian, it had no further impact in the history of the Antillean mammals, because Jamaica became submerged soon after and with it any terrestrial forms. The rest of the accompanying fossil fauna consists mainly of aquatic vertebrates—fishes, crocodilians and turtles- and a rhinocerotid species (Hyrachyus).